The Foot in the Door (& Kicking it Down)

The DraftKings RTO was made public this week in a $3.3 billion deal.

Of interest to me, was their investor package, page 17, as below. 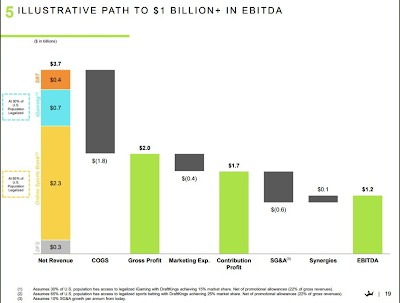 The bar chart on the right is revenue (with 65% of the U.S. population being legalized to wager). Notice that the projected revenue for Daily Fantasy Sports is $0.3M or $300M. This is dwarfed by the $2.3 billion from sports betting.

As we all know, DraftKings started as a DFS company.

We've spoken a lot about the monetization of critical mass here on the blog. Namely, if you have a lot of people with a propensity to spend money with you, this group has a good deal of future value. DraftKings has leveraged their critical mass to build not a DFS company, but a gaming company.

This is not unlike Betfair's critical mass in the mid 2000's, with one million customers and $3B on account, with over 50% of their players engaged in horse racing. Nothing was done to foster this critical mass - not by lack of trying by Betfair - and that mass moved onto something else.

When people like me - and I'll caveat this with WDIK - talk about creating critical mass through lower takeout, this is kind of what we're getting at. If you have 200,000 people giving you 4% margins, it's a hell of a lot better than the current 20,000 or so giving you 20% margins. 200,000 people you can work with; with 20,000, you're simply focused on squeezing to meet revenue targets.

at December 27, 2019
Email ThisBlogThis!Share to TwitterShare to FacebookShare to Pinterest