If There's a Track that Could Use Insideharness.com, it's Mohawk

I texted a friend who is a very seasoned player last week and asked a simple question I've asked a million times.

"Anything to look into at Mohawk?"

The response - "It's so hard to know who is trying."

Mohawk, like we've seen at several harness tracks in the new age of harness racing, has been one of the "wait until next week" tracks. Bad post, not an ideal scenario, we might be able to drop and be 1-5, we should just wait until next week.

This has happened a lot in the sport, even in the olden days (i.e. 10 or 15 years ago), when it comes to half mile track racing. Punishing a horse from the 8 who could win just wasn't done a whole lot, because in seven days the horse could get a good post and try for the win. But nowadays it has, in my view (and the view of many, like my friend above) changed to include even mile or 7/8's ovals.

Earlier this summer the Meadowlands, in their quest to combat this phenomenon, partnered with Insideharness.com, and track owner Jeff Gural asked participants to sign up, and share insight. There, 60 to 80 comments a night by trainers and/or drivers, give some details into the horse's intent. Even simple words like "bad post", or "missed time" tend to help guide customers through the murky morass we've seen in the sport. They can be helpful.

Over at Mohawk, which is on insideharness.com, there's been no such push. Trainers like Chantal Mitchell post in studious fashion, and a few others have from time to time, but it's pretty much a ghost town.

With the head scratching betdowns to 2-5, form reversals, and my friend who doesn't seem to have a clue who "might be trying tonight", Mohawk has been at times completely bizarre to wager the last year or so (I have stopped completely). If there's a track built for insideharness, it's probably the Campbellville oval. It'd be nice to see a Gurallian push there, as we've seen at the Meadowlands.

Parx has always been a bit odd, in my view. The slots-infused purse track was reticent to reduce usurious takeout in the past, and today announced a change to their menu. They don't have one jackpot pick 5 but two! It seems like a track that takes one step forward and two steps back. Or maybe even three.

We complain about races taken off the turf late, but in the NFL this happens, too. Nathan Peterman was supposed to start for the Bears on Sunday because the listed starter hurt his ribs in warm ups. The line moved a full 2 points, and I expect thousands of DFS teams were subbing. But out trotted Trevor Simean instead. What a miraculous healer. The big difference of course is that the NFL doesn't depend on gambling to survive like racing does. But I did find it a bit comical.

Charles Simon is back on twitter again. I wondered if Elon Musk banned him for his view that Flightline was smart to retire from racing. Then I realized Elon is for free speech, even if it's for opinions as wrong and horrible as that was. So it must have been something else. Welcome back though Chuck!

at November 28, 2022 No comments:
Email ThisBlogThis!Share to TwitterShare to FacebookShare to Pinterest

There's All Kinds of Handicapping Biases

As seasoned bettors, arguably nothing befalls our selection process more than biases. They are truly a pox on our house.

I woke up this morning to see headlines blaring, "Kirk Cousins Shuts Down Prime Time Stigma" as he went 30 for 37 for 299 yards in a win over the New England Patriots last night.

There's a whole lot of bias going on with most headlines nowadays, and I guess this is just one of many. But, let's break it down.

This deadly bias is where we see what we want to see, or alternatively, repeat what others are seeing (because we don't do the work).

We see a "prime time" 11-18 record or watched a few games and saw a bad performance or two from Cousin Kirk, and we heard it on talk radio. He sucks under the lights! It has to be true, right?

Here are a couple of Cousin's Prime Time game stats.

His teams lost both those games.

Since 2014, he ranks 9th in QBR in Prime Time, just ahead of  another QB who captained 7-9 type teams for most of his career, Matt Stafford.

Over in horse racing land, we can see this bias a lot with rider or driver changes. We select the time the rider change worked to remember, but forget the times it didn't. It can cause us to come to some really bad conclusions.

This, as we notice in horse racing, is the "I see what I see with my own eyes, so don't tell me anything else" bias. The problem is, our eyes remember things selectively. We should not do that.

This is one I think we do much better with in horse racing than sports radio narratives do. We often discount the performance of a horse's last race, where they don't.

Cousins played earlier this year in Prime Time and was ineffective, probably due to a 55% pressure rate, where few signal callers do well. But it was there. It was the last game in people's minds, so last night's performance becomes an outlier, probably due to our next bias.

This is an ugly one. If New England didn't have a TD called back, Cousin's performance last night might be a loss, adding to the negative record. It's another game in the "he stinks" column. Mike Florio over at Pro Football Talk will have written a story about it already.

Results bias is at play with everything we do in horse racing. I have a friend who has been doing woeful at Mohawk, however, he hit a couple tickets lately. Those results don't mean much, other than the random, and nothing can be concluded from them. He should, and will, tread lightly, despite the result.

We've heard it before - it's the process, not the result. We can hit something without a good process, but we can't be fooled by it, because the process matters infinitely more.

This too is another dandy. And it causes many of us a lot of trouble.

I don't know how many angles I thought were right, that over time were not, but I stuck with them far too long.

"Look at that, see I told you!" We tend to believe what we want to believe.

I see Kirk Cousins with happy feet (I might too, as he's seen over 20% pressures in his career playing behind some bad lines), behind in game trying to make something happen as lots of 8-8 team QB's do, and throwing some woeful passes. It confirms to me that he's no damn good. But by doing that I miss some very, very good passes and performances.

I see a horse who is 0 for 15 who lost a few photos where I bet that is a no trying nag. When in effect we should be unbiased enough to know the horse was just being beat by faster horses.

If we look for a confirmation of our bias we will find it. We will absolutely find something that confirms our belief. But it doesn't mean we're right.

In sports land we can hear a lot of noise, because talk radio and talk twitter needs to fill time. I'm old enough to remember when Peyton Manning was a choker because of his early playoff record; LeBron, is he a "winner"; is Eli better than Peyton because he has more "rings" (how laughable was that one). Ovechkin can't win a Cup.

Like with most things, the extremes never tell a story. The horse we bet, is what the horse is; from his races and past performance lines. There's little mystery surrounding him or her.

There's not much mystery in Cousin Kirk. He's no Dan Marino or Aaron Rodgers, but if it's dark outside, he's no Nathan Peterman either.

Have a great weekend everyone.

at November 25, 2022 No comments:
Email ThisBlogThis!Share to TwitterShare to FacebookShare to Pinterest

Back in the 1970's in the northern tundra there was a guy in town who everyone knew, Frenchy Clouthier.

Frenchy dropped out of school early and became a mechanic, and he could fix pretty much any machine in a jiffy. He also had a propensity for being a bit of a daredevil on these machines; cars, trucks, bikes or at a place perpetually under snow cover, snowmobiles.

One day word was getting around that Frenchy was going to do something pretty wild. Right in the middle of town he was going to cross the river - not a small river, a fairly big one - in his suped up snow machine.

Now, this might've not been the biggest story ever in January, because the ice was four feet thick. But he was planning to do this in July when the river was, well, a river.

A grade school friend and I got a ride from one of our parents because we had to see this spectacle. We had no idea how Frenchy was going to pull this off. We set ourselves up on the bank in a good spot, along with most of the town.

Right on cue Frenchy barreled down the hill in his ski-doo, reaching blazing top speeds; gravel and sand flying everywhere. We held our breath, wondering if Frenchy was going to end up, metaphorically, crashing into Arnold's chicken stand.

The machine's skis hit the water, and instead of plunging directly into the depths of the cold river, sinking both man and beast down to the bottom, something amazing happened. Frenchy and the snowmobile just kept going. And going and going. He reached the bank on the other side, and waved to whatever-many incredulous locals.

When in my real life over the last twenty years I give a seminar on under promising and over delivering, I sometimes talk about Frenchy. That man surely could deliver. 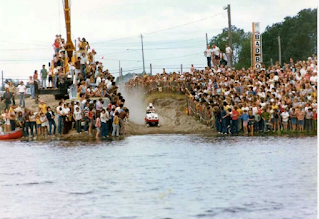 In the sport of horse racing I don't think we've ever had an underpromise. And really, who is promised what can differ, sometimes in an opposing way.

We promise horsepeople they can qualify a horse in 45 days which is good for them, but it's injurious to bettors.

We promise dreams about lasix free racing, but that goes against the trainer you sold your bleeder to because the horse can't go without the drug.

We promise uniform rule books, and then we don't deliver adjudicating or the calling of these rules consistently because we treat them like guidelines.

It's Newton's Law of Motion - we put forth something with a promise, but an equal and opposite reaction from another fiefdom pays the price, which always results in an under deliver. This sport's promises are a paradox.

Racing, I have always believed, should have always played a whole lot of small ball. It needs to promise what can be achieved and do that one small thing well by overdelivering. Then do more of them. There is no doubt in my mind it can be done - with ADWs, track rules, consistent judging, myriad things. However, I think the culture is so broken and so overcome with the fiefdoms, and arguments, and intransigence, it can't embrace it.

Business is at times one of the most pure, simple vocations. If you are telling customers you're going to cross a river, you need to make sure you get to the other side.

at November 14, 2022 No comments:
Email ThisBlogThis!Share to TwitterShare to FacebookShare to Pinterest
Older Posts Home
Subscribe to: Posts (Atom)