Churchill Plays the Hand They're Dealt

CDI announced the iGaming and sports betting space is too much for them, and they are discontinuing investment in that particular vertical.

“Many are pursuing market share in every state, with limited regard for short-term, or potentially even long-term, profitability. Because we do not see — for us — a path in which this business model delivers predictable and acceptable margins for at least several years, if ever, we have decided to exit the B2C online sports betting and iGaming space over the next six months.”

We all like to poke fun, or at times get angry at CDI (seriously guys, you sold Arlington, we can't be happy). And I ain't a CEO - I didn't even stay at a Holiday Inn Express last night - but this was the right course of action for them. They're a smart company.

Back in 2010 I was working with a company who created a type of Facebook for music. It was an interesting idea, and had some backing, and although the budget was small ($10,000 per month) I began marketing it. Half way through month one, the owner called and said, "can you spend more, my budget is now $100,000 for May."

They had financing lined up and budgets meant pretty much nothing; growth meant everything. This type of system did occur in the 90's with dot coms and we'd seen it before, but this was my introduction to the post-2009 world of easy money through easing.

That system has only increased. Investment, in the US especially is going bonkers. There is so much money out there, with simply nowhere to put it. They've found it in one spot of many: With sports betting companies.

These companies have so much money to burn, it's absolutely staggering.

With this capital you can concentrate on customer aquisition at almost any price. If you and I run a SaaS or CRM company, we have to bring in a CAC (customer acquistion cost) of say $1,200 or we go broke. Sports betting companies can have a CAC of $2,000 for a $300 LTV (lifetime value) and they don't give a crap.

CDI, unlike these companies, does give a crap. Unless you have an edge on technology, there really is no other choice, as big as CDI and others are.

It truly is a world the financeers of the last century would be woefully unfamiliar. And a world which older, established companies like CDI can have trouble navigating.

at February 24, 2022 No comments:
Email ThisBlogThis!Share to TwitterShare to FacebookShare to Pinterest

We wrote about using big data a few months ago in the context of remembering to use the qualitative as well. I won't rehash it (as I tend to do with this 3,000 post blog) but I will offer an offshoot post from something I read today.

Jeremy Balan tweeted a neat thread about Zillow and its home pricing algorithm. This "big data" algo worked super-well with back data and in real time for awhile, but when it came to buying houses in real time it cost the company a whole pile of money.

It's a really good thread as to why, and I think it's important, for us who play racing.

Big horse racing data is used by the teams, and it can see what we do not. Many #theyknew horses are not #theyknew as in inside money, but more the AI algo knows. As well, with rebate, many horses are bet down where you and I aren't going to play them even if we like them; but the algo says it's a play.

One area, as the thread author alludes, where big data can fail is the qualitative as we talked about in the last post.

But another, in my view, is that it simply isn't as nimble with short term trends - track changes, and trainer trends are two of them. I personally love playing dead front end bias tracks, because I look at where the teams are, and they seem to be still betting speed. If a move-up trainer is ice cold because there's a rumor someone raided a barn, they're still, again, in my view, too well bet.

I know the teams and their algo updates and is aware of these things. I know they dot i's and cross t's when things change. But if we're good handicappers, I can't help to think we'd be better at it.

I took an interesting seminar today with something along these exact same lines, and we do see it even with multi-million (billion) dollar algorithms for marketing and business. They can be slow. There are holes and there are blind spots. There are things we can do better than they do, and they are recognizable.

In horse racing, from Beyer to Crist to Cramer, we've often heard how we need to be aware when we have an edge. This was in the context of the person sitting next to us. Today it's much harder, but recognizing when we do have an edge on the machines and acting upon it is the same thing. It's just a different century.

Have a nice evening everyone.

at February 23, 2022 No comments:
Email ThisBlogThis!Share to TwitterShare to FacebookShare to Pinterest

When Feelings Trump Everything Else

Russian skater Kamila Valieva performed in the short program last night, with the Sword of Positives dangling over her 15 year old head. She did well, but there was a pall over the whole proceeding.

Commentators were left pretty much speechless, save for saying this skate should not even be happening.

I could go through the cold hard logic about due process and other lawyerly things that I know little about - except that they're very important in a free society - but that kind of butchers the point.

This whole thing feels icky. And sometimes a feeling trumps everything else.

When Baffert - who deserves and is receiving due process - ran horses in New York after a hearing, it felt the same way. If he races in next year's Derby, it will as well. Commentators talking about the ill-fated Medina Spirit while talking about another three he has in, well, I don't blame anyone for feeling what they'd feel.

I believe when a sport is put into this position, it signals a problem at its own core. When rules are guidelines, punishment is ad hoc and written in sand where a breeze or wave can change everything, these sports should expect our feelings would override everything else.

I have no hope the IOC does things right, and neither do many of you. We both probably feel the same way about this disparate, maddening fiefdom-led sport we follow daily called horse racing. We have little confidence in the power structures.

Right of center political commentator Ben Shapiro often says "facts don't care about your feelings", and he's probably right. We need to always rely on fact and remove emotion out of the equation. But sometimes the facts suck, and I don't think any of us need to apologize for feeling the way we do.

at February 16, 2022 No comments:
Email ThisBlogThis!Share to TwitterShare to FacebookShare to Pinterest

Racing - Coming to Grips with Who it is

There's a rule in marketing - the consumer will see what you are, not what you want them to see. In fact, I'd proffer that even in closed industries it's probably true.

For an illustration, I'll present this rather bizarre story in the WSJ about the Olympic Mascot Bing Dwen Dwen. This lovable little creature has been flying off the shelves, but the Chinese authorities hit a snafu last week: Bing Dwen Dwen was interviewed by Chinese State Media and it turns out he/she spoke like a middle aged man. 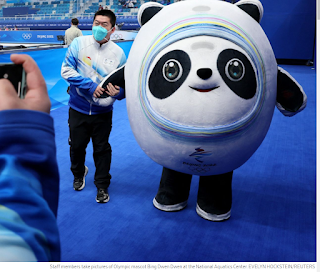 Sensing the marketing issue, i.e. they're pretty sure it creeped everyone out, the Chinese Communist Party intervened to shut down the story. The hashtag was wiped off Weibo and clips of the interview owned and shared by people were deleted off the internet. In Soprano-speak, everyone and everything got whacked.

Interviews were cancelled, because, no, that thing you saw you really didn't - officially "the mascot cannot speak." The next day, State media sent "experts" on various programs to assure "Bing Dwen Dwen could only make bubbling noises."

Clousteauing that no one was particularly happy with being gaslit, they switched to a new tactic - bringing the mascot out to show it, in fact, could not speak. Because in person, apparently the media and public would be sure to believe it.

That didn't seem to do much, because, well, fool me once!
Reading the story I could not help but think of the oh thousand or so times, I read that racing should stress the positive; the story about a girl and her horse or the groom who loves horses. That if only we had some sort of state media to control messaging things would be well.
Sure, positive news is fine, but the public - with stories about Derby winners who have died, positive tests, some guy named Fishman, and just about everything else - won't buy it. Just like they won't buy a stuffed mascot doesn't have a person underneath no matter how many times you tell them to.
We have problems in our sport, but one of them isn't controlling messaging. We are what we are and trying to be something else is completely futile. In the end we might just find if we meet the problems head on and are not worried about burying them, the public might be fine with it.
After all, despite the gaslighting and creepy uncle stuff, Bing Dwen Dwen products are still flying off the shelves.
at February 14, 2022 No comments:
Email ThisBlogThis!Share to TwitterShare to FacebookShare to Pinterest
Newer Posts Older Posts Home
Subscribe to: Posts (Atom)