The Change Train Needs More Than a Conductor

I caught a quick story in the Financial Post today about what companies do when things aren't going well, and they need a paradigm shift. The author focused on how one company - Best Buy - turned things around.

I found two planks kind of interesting. One plank,  is about a reorg -

"Putting a plan into action also requires the right people in the right places. Who gets brought in depends on whether the culture of the organization needs to be completely gutted or if a few tweaks will suffice. For example, in a situation of a complete reorganization, it may be better to change out entire teams under divisional leaders, especially if there is complacency and little buy-in. "

This strikes me, as I read this tweet this morning about Del Mar.

As most know, we've seen a couple things happen at Del Mar the last decade. They (along with others in California) raised juice, making payouts to customers worse; they replaced polytrack surfaces with dirt, which raised favorite win percentage, and resulted in (both in theory and practice) more breakdowns.

Now, let's say, like Best Buy, the culture was changed at the top.

Instead of switching surfaces, this new management said, we want fewer breakdowns, bigger fields, less chalk, and a better betting menu, and we'll reverse all those decisions.

I wish them luck. The existing stakeholders would want nothing of it.

Which brings me to the second plank, according to the author.

"A restructuring gives the company the opportunity to replace those shareholders who are not willing to support the company’s refocus. It is an important process to go through as capital partners need to be aligned with management and the plan about to be implemented."

The people who are giving you money need to buy-in as well. It's a house of cards without them.

In racing I find we often ask for change at the top; that management is bad; that they don't know what they're doing. Leaving aside if that's accurate or not, I'd contend it doesn't matter much. If someone was put in charge that demanded change, I highly suspect he or she would be run out of Dodge in two shakes of a lamb's tail.

at July 30, 2019 No comments:
Email ThisBlogThis!Share to TwitterShare to FacebookShare to Pinterest

When Handicapping is Irrelevant

There are things that happen from time to time that reminds us that gambling is a gambling game.

This weekend we saw something during the Barracuda golf tournament that doesn't happen very often - the scoreboards across the interwebs failed to update. If you happened to watch the TV coverage (and kept track of what a birdie or eagle meant) you were better than most, but if you were watching on your phone or computer, it was pre-Pony Express.

With that, the big bookmakers were caught in the crosshairs, and the gamblers could find gambles.

After about a half hour, the books pulled everything off the board.

This had nothing to do with handicapping. It was just a gambler being presented with a good price and having to take it.

In horse racing this too happens (albeit rarely). And it pays to be ready if it does.

Garnet wrote about the "mad bomber" at Northfield Park a couple of weeks ago. With the smaller pools, any large across the board bets will add pool value, and someone betting large was messing things up royally. Gamblers like King of Yonkers Bucky Swope didn't even have a program, but were there in the pools, trying to catch a place price 6X what it should've paid.

Although these are extreme examples, I think it still provides a lesson to those of us who play the game. Sure it's important to try and figure out who is going to win, but when you're betting, the odds offered to us is the great pass/fail question.


at July 29, 2019 No comments:
Email ThisBlogThis!Share to TwitterShare to FacebookShare to Pinterest 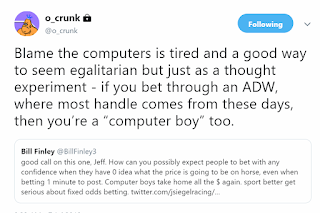 
at July 15, 2019 No comments:
Email ThisBlogThis!Share to TwitterShare to FacebookShare to Pinterest

The Calgary Stampede is under way for yet another year, and looking at the record attendance numbers from day one - over the two weeks it attracts upwards of 1.5 million fans - it should be a well-attended event.

The Stampede, over the years, but especially in 2012 when 9 horses perished, has been the target of animal activists. In response, some changes were made.

The above, naturally, has not satisfied the activists - nothing but a ban would. However, the general public has been on board, and most-importantly, so have the politicians who hold power over the event. The prevailing thought this year is that, no, the event in Calgary is not in jeopardy.

Horse racing has reached a similar crossroads, and if we truly examine it, some good things have been done.

But, the changes are nowhere near as comprehensive, quick, thoughtful and effective as the Stampede.

In horse racing a simple whip change causes consternation that can last three social media lifetimes. A chip showing vet work planted in a horse for its welfare is considered an affront to "my property" and none of anyone's business. Changing the rules of the game like the Stampede has would be sent to horse racing committee hell, and might not resurface by Equestricon 2049. Unfettered university research, with a carte blanche to study our animals? Good luck.

Calgary's libertarian, agrarian, cowboy culture has so far embraced the changes, and if they can get meaningful reform done, one might suspect horse racing would too. But so far, horse racing's infighting about lasix, a reluctance to change the game, and private property issues have seemed to won the day.