Racing's Lack of Understanding Numbers & the Need For Real Research

"The higher takeouts took effect Jan. 1, 2011, amid howls of protest and calls to boycott California racing. Fortunately for California, the decision has proved to be a good one. Nearly $146.5 million in total purses were paid during FY13, which is up 13.7% from the total purses paid in FY11. Handle on California races dipped slightly from $2.9 billion to $2.88 billion for FY12—the first full year following the takeout increase—but total handle has completely recovered. Total all-sources wagering on California races reached just shy of $3.04 billion for FY13."

FY 2011 wagering, where the handle fell precipitously the six months following, and after a takeout hike in 2010 at Los Al, which also lost wagering, was over $3.4B. Now it's 3.04B. There's much more to the story, like Lenny spoke about here.

Even despite that chart - which any fortune 500 company would find heads rolling for, not praise from the media - the presumptions are specious.

Since the takeout hike in 2010 purse gains came from the TOC negotiating a larger percentage of takeout; not from a price change. In other words, even if the takeout rate was not hiked, purses would've gone up, making this a self fulfilling prophecy.

What is even more comical, to combat massive losses of wagering during the first four months of 2011, a lower takeout 14% Pick 5 was created, with again the TOC taking a higher percentage of takeout for purses. A rebate program for large wagers was created. This season, 18% doubles were brought aboard to try and get some money back.

In part, lower takeout bets, and systems, helped stem the tide of massive handle losses that were caused by higher takeout. Only in horse racing would people not find that laughable.

During this so called 'success', track revenue has fallen 28.23%. That's what happens when you rob Peter to pay Paul. 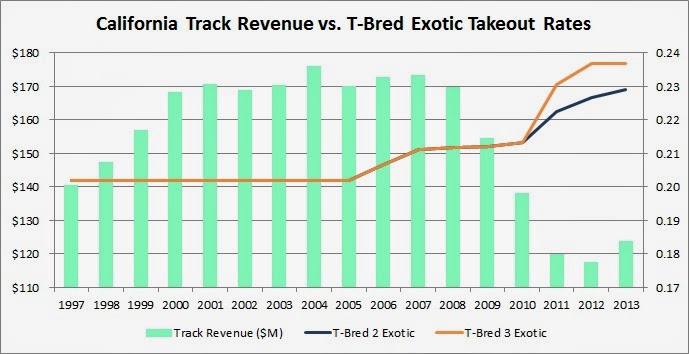 When someone reads the above they might conclude California should raise rakes again and make so much more money. Nonsensical. If that ever happened, it would not only be the horseplayers protesting, they would be arm and arm with the racetracks -  who were brutalized by the change in splits - and anyone else who cares about the amenities needed to house the sport (with revenues overall down over $50 million+ since 2010, there are a lot of people suffering cutbacks).

Racing policy is almost always created on the anecdotal. Steve Wynn doesn't do that with the number of slot machines, table games and how much to charge for each. The lottery system does not rely on anecdotal to jockey their takeout rates. No business does. But racing, seemingly happily, goes about things much differently, while handle circles the drain in charts like the above.

The Jockey Club, or others, need to fund a pari-mutuel research center with smart people doing the research that a multi-billion dollar industry deserves. It needs to stop the madness, because if it doesn't, articles like the above can change minds. That happened in Italy when year over year they jacked takeout to 41% and slowly imploded; now there is virtually no more horse racing there. It's happened with other games that are now defunct. Horse racing in North America cannot follow that same path. It's begging for someone to step up to the plate, someone to lead. It can't come soon enough.


at July 10, 2014
Email ThisBlogThis!Share to TwitterShare to FacebookShare to Pinterest

I thought everyone knew the Thoroughbred Owners took a larger share of the juice.... I guess not.

Historically, the Jockey Club will shell out big bucks for research and then completely ignore the professional opinions that they paid for. Not sometimes, not occasionally, EVERYTIME. The feds coming in and rebooting the entire sport is the only hope....