What a morning in horse racing land!

First, we have the Sports Illustrated Fan Vote for Sportsman or Sportswoman of the year that was announced today. Horse, American Pharoah, who is the first Grand Slam winner in eternity was the runaway winner of the fan vote with 280,000 of them, but he was snubbed for a tennis player who only received 6,000 votes.

Deadspin got into the act with a headline with a damning article (not on the vote, on the reaction to it). Cross promotion on my timeline had football guys who know nothing about horse racing chatting about it and linking Horse Racing Nation articles. Neither of the above are flattering, but so be it. 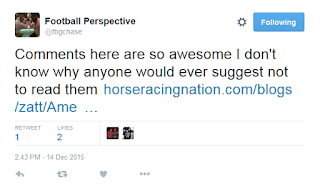 Leaving aside the fact that votes have never meant much for horse racing - "lower takeout" wins most bettor votes and "hey, which one of you voted for increases in picnic table prices, anyway?" happens - it shows this fan base to be passionate. But to me, to the point of being uncomfortably passionate. Some of these things turn us into "Bring Chrome Home" usenet groups.

Also this morning we have an article on Thoroughbred Commentary about another gambling game, daily fantasy sports.

And, if that happens, horse racing needs to have its lobbyists jump in and seek compensation from the government due to this new form of competition. After all, while DFS sites might have millions of customers, the workforce is miniscule. The horse racing industry, on the other hand, employs hundreds of thousands of people and deserves a cut in pari-mutuel taxes and other benefits and protections to help stay afloat and preserve all those jobs that help drive the economy.
Under that scenario, with so much new revenue pouring into the government’s coffers thanks to DFS games, there’s no reason why horse racing should not receive a break to help it maintain its share of the gambling pie.

Horse racing, which is populated by captains of industry and rugged individualists, which abhors anyone telling them who to do with "their horse", who buys horse for sometimes millions off a sheet of pedigree paper with pure risk, who wants to be left alone, who wants no federal oversight, who votes down taking a percentage of slot money for the common good, who won't ever elect anyone with any power because they might lose some, suddenly becomes a disciple Hugo Chavez.

I get that free money is good if you're the one getting the free money, but it's so far out of the mainstream of what most in this business believe, it's a head-scratcher.

I understand the passion for the business. I understand that when handles are going lower and you are being at best snubbed and at worst attacked by some outside forces it brings about even more passion. But passion can quickly turn into zealotry. Zealotry tends to not fix problems, it tends to gloss over them through that protective 'I got your back' shield, and that's not healthy for a business that needs real meaningful change to survive.


at December 14, 2015
Email ThisBlogThis!Share to TwitterShare to FacebookShare to Pinterest