Yesterday the New South Wales Premier, in response to a report on the live baiting scandal in Greyhound racing, banned the sport in his province. Hundreds of people will be out of jobs, and dogs will be looking for homes.

There are those in the sport of horse racing who believe that PETA or other groups are inconsequential, because you will never get them to agree with you (when your sport involves animals). I think they're half right. The problems lies, as above, with politicians and the general public, who do matter.

Greyhound racing turned a blind eye to an anachronistic, tone-deaf practice in that sport. The sport has paid for it.

Harness, and to a lesser extent Thoroughbred racing, suffers, in my view, from a similar disease. I read about, for example, "kicking" harness horses that insiders say is not really "kicking"; that it's better than "giving them stifle shots, y'know" (that really misses the point doesn't it?), and it's not an issue. It's similar with whipping in both sports.

If you are arguing riders should be able to "whip horses more", or drivers boots should strike a horse, I'm sorry to say, you are completely unaware of how the world sees horse racing in 2016.

Like the sport of greyhound racing, horse racing's problem is not about the PETA's of the world. The power they have is in making polticians wonder what in the hell they're subsidizing. When you give them an opening, like greyhound racing did with the Aussie Premier, they jump through it.

And, don't kid yourself, they're doing what the public wants. 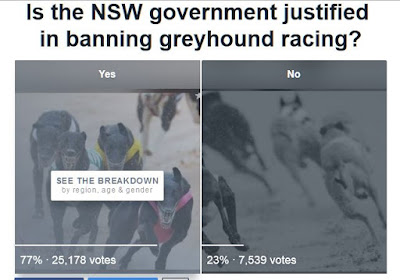 at July 08, 2016
Email ThisBlogThis!Share to TwitterShare to FacebookShare to Pinterest