Baffert and "That's Not Right". 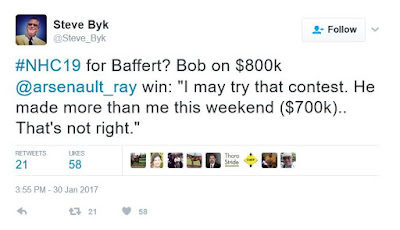 Ray Arsenault (congrats Ray) competed in the NHC this weeekend and took home the big prize.

Ray took the lion's share of the purse provided by other horseplayers who contributed to the NHC purse pool.

Bob took the lion's share of the trainer money provided by horse owners who contributed to the Pegasus Cup purse pool.

It's certainly "right". It's rudimentary math.

If Bob wants to make more than Ray next year, he can. He just has to get 12 horse owners to put more money into the prize pool. Whoever wins next year's NHC can do the same thing.

at January 31, 2017
Email ThisBlogThis!Share to TwitterShare to FacebookShare to Pinterest