Flipping on to twitter in this day and age and you'll see classical liberal economists up in arms about protectionism. It's not like they don't have a point; wealth is created when we do what we're best at. It's not 1930 anymore.

It's more than that, however, because protectionism breeds more protectionism, and this exacerbates the issue time and time again.

We saw some evidence of this just today, in horse racing. 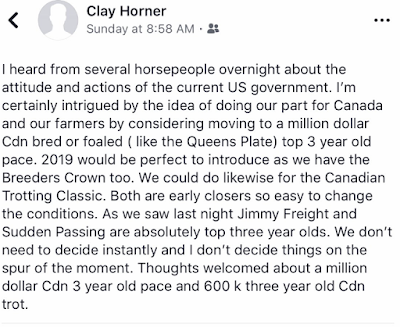 But hold it, Donald Trump was complaining about Quebec farmers who are protected through a supply management subsidy and are allowed to charge Canadian consumers 270% more for milk and dairy products. (This despite a "free trade" agreement).

So, and such is the case with protectionist policies, we have a bit of a puzzle.

Canadian farmers have protection, so someone outside the country complains and slaps on protectionism of his own. In response, a horse racing executive wants to create a race and not let Americans compete for the money to protect Canadian farmers with another brand of protectionsim.

Are you keeping track of all this?

The North America Cup - Canada's million dollar race - is a huge success. It's the biggest pacing race in the hemisphere (I'd say the world) and it represents the jewel of the harness racing season north of the border. It drives the most handle, television coverage and owners and trainers from everywhere want to win it. In fact, it's named the North America Cup for precisely that reason. There's no reason to mess up a good thing because someone in another country likes some goofy 1930's economic policy.

Have a great night everyone.

at June 14, 2018
Email ThisBlogThis!Share to TwitterShare to FacebookShare to Pinterest