Here are a few things (ten of them!) people who have blogs tend to do when they're taking a break from work and want to write something. I hope you like maybe four or five of them.

1. The Big M is partnering with Insideharness.com to get more information out to the betting public. This probably stems from some serious to-the-back-with-chalk racing we've seen at times lately. I like it and have been calling for this stuff for a long time, Chip seems more perplexed than when an official calls a Penguin for an obvious trip.

2. I went to the track for the first time in a long while a couple of weeks ago. This track - Mohawk - reminded me what it's like. The food was good, the setting nice and I had a great time. Going to the track is underrated. 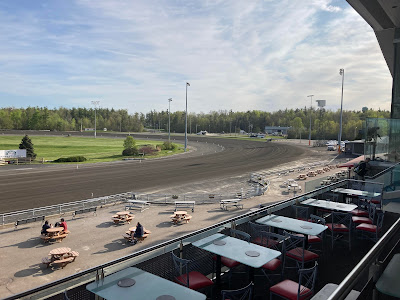 3. I saw a tweet yesterday from Ed from Los Al. He said something about the importance of accurate morning lines to the betting public. He's right. People like David Aragona need a raise; others, I know it's hard but please do better.

4. I watched a little of the Mountain the past week or so, and I was pleased to see Mark Patterson hosting the show. The insight, the stories, the analysis were all presented in a perfect Mark way. It was nice to see you again Mark.

5. Horse racing has a ton of variables computers pick up and it makes them effective. However, the nuance of the game still leads us into places computers can't go. In hockey tonight it feels similar to me. Goalie Mike Smith could not stop an 18 inch Chicago deep dish last game, and if they put him back in I I am supposed to bet Colorado and the over. But, the narrative in the dressing room he is no good right now, and often teams get super defensive in this type of outlier situation to protect the netminder. Should I bet the under? I think so.

7. No bets on the Ontario election tonight for me, because it's a foregone conclusion. The economy hasn't been awful in my home province, COVID responses were not off the charts bad or good, and people seem relatively happy with Premier Ford. Plus, it's super hard to ditch someone after only four years up here in the Tundra.

8. I read this week that 117 million of the 300 million or so guns in the states are owned by collectors, representing 3% of the population. I collect comics and old programs.

9. I am a fan of Rich Strike and his connections. I hope they win the Belmont.

10. Have a very nice Thursday everyone.

at June 02, 2022
Email ThisBlogThis!Share to TwitterShare to FacebookShare to Pinterest