In North America, we are used to watching the big races covered by the networks in a certain way. Of late, that means celebrities, parties, clothes and interviews about celebrities, parties and clothes. Despite hard-core fans despising it, it does seem to work well for ratings.

And of course, if you want to watch analysis about the race, there are dozens of other sources, including the track feed.

Yesterday's Elitlopp coverage (covered by Sweden's racing network and broadcast on TV) was something we really weren't used to. The races on the undercard, the interviews, the features and almost all coverage was related to the racing. Even when they interviewed trainers, it was done in split screen with the other screen showing the horses scoring out on the track; or (gasp) the odds. 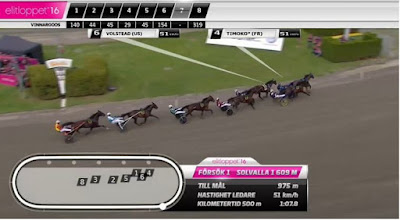 While the race is being trotted, the coverage continued its race-focus excellence. Because the horses are not easy to see on screen, the producers often used boxes to show who was who, and where they were. If a horse was making a move, people at home saw who the horse was, as again the producers highlighted the horse. A form of Trakus was used as well.

We have spoken about this many times with the Derby. How difficult would it be to highlight Exaggerator live in-run like this when he was making his Derby move? He was one of the favorites, so letting the public know where he is on the track seems essential.

Sweden is in a somewhat unique position of course. Unlike NBC or ABC, they have to cater to a betting audience because most of the people watching have a bet on the race. The pick 6 and pick 7 is sold in corner stores and over $1M was bet just into the win pools for the Elitlopp itself.

As I have mused before - the best thing for racing coverage in North America is probably for NBC to own an ADW.

Most of the excellent crowd, coverage and size of the bet is not done by accident. Sweden invests heavily in its product, with access to $25M of TV time, a $1.5M digital marketing budget, etc. For a country with the GDP no bigger than Pennsylvania's that's huge.

As for the race itself, it was won mightily by the former American horse Nuncio. The horse was huge and it shows just how amazing that crop of horses in the US was. Nuncio was considered the third string of Father Patrick and Trixton that year, and he probably was. The crop was near tantamount (for Thoroughbred readers) to Curlin, Street Sense and Hard Spun. Hard Spun (Nuncio) turned out to maybe be the best (we would not know, the other two are retired).

I am continually getting to know Canterbury Park, and I am continually pretty impressed. Sure the racing this weekend had a lot of off the turf scratches and short fields, but the crowds were huge and the betting (considering) continued to be pretty fair. This place is a little gem.

Much has been made - and rightfully so - about the takeout reduction, but much that has been made, in my view, is wrong about it.

Canterbury cutting the juice is a low risk way to get noticed. Simulcast money (through signal fees) has zero cost - opportunity or otherwise - from past years. Any increase is gravy. On-track, where about $12M is usually bet, is the only risk, and really it is not much of one.

Canterbury, at the end of the year, will have returned about $375,000 through a rake reduction. This $375,000 is not kept in a sock. It is rebet in either their pools, or their simulcast pools where they do about $60M a year in huge margins. The money that is not rebet is taken home (improving Cx) or spent on food, beer or in the card room.

The hand-wringing that goes on with takeout reductions just doesn't happen in any other business that I see. When you get McDonald's coupons in the mail for two for one Big Mac's (a Big Mac does not have a 50% margin), no one bats an eye. No one runs around asking if that day the coupons made McDonald's franchisee money (they're a loss leader). It's lifetime value, cx. It's business.

When a track gives back $375,000 out of $52.3 million for a promotion, or to increase lifetime customer value, it's only 0.71% of total revenues. It's investing a little in your customer base, so that (for hopefully years) you have a happy customer base who's spending more and more of their gambling money with you. You don't need an MBA to figure it out.

Have a nice Monday everyone, and enjoy the racing. Canterbury goes at 12:45 central, and Belmont races the Met Mile, er, no, but it looks like a good card.

at May 30, 2016
Email ThisBlogThis!Share to TwitterShare to FacebookShare to Pinterest

A track I bet moved takeout on a Pick bet from 25% to 15%. Pools doubled and tripled from what they were at 25%. Track revenue from the bet increased while grabbing a smaller percentage. Seemed like a win for bettors and a win for the track. The person in charge put takeout back to 25% because it "wasn't working." The track now has smaller Pick pools with higher takeout and gets less revenue. Go figure!

You can include Australian racing for their pre-race coverage being actually interesting and useful. North America's talking heads are pretty much just that, repeating what horseplayers already know from the Form.

Contrast that with the broadcast team I recently found via simulcast of an Australian third-tier “country” track. Not only were trainers quoted before each race, there were short interviews after with jockey and trainer. Analysis would include stats and details not in or no longer in the past performances. It often included physicality with details; the best we get in the US is “so-and-so is the best-looking”. It all made for an entertaining show to be sure (Breeder’s Cup take note!). It’s not for the player that tries to insta-cap 20-30 races an afternoon.

The first person above doesn't understand the math at all.


And Canterbury is getting clubbed with this experiment.


Notice you never hear a thing from those who, before the meet began, were boldly predicting handle would be "up 40 to 50%".

Handle for the day up 3.6% at a tremendous revenue loss to horsemen and racetracks all around the continent.