As most know by now, the ratings for the Kentucky Derby were down from last year and the lowest since 2012. When the ratings come down, industry folks, folks on the twitter or the facebook, or commenters to stories look for reasons. Those reasons usually begin and end with not liking Johnny Weir, a dislike of hats, or lamenting interviews of some star who likes a horse because he's named after his first puppy.

This ain't one of those posts. I have, frankly, no idea why the Derby ratings were down. It's probably just random.

What I do take issue with is the Kentucky Derby race coverage.

Pop Quiz: Find me Tom's Ready in the screen grab below. 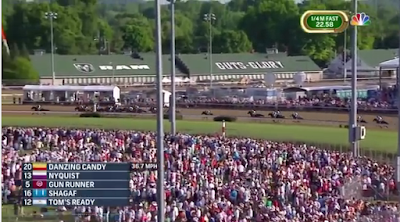 For any sporting event, whether it be well-known ones like baseball, or football, or lesser known sports like hockey, the nets constantly have tried to improve the product so people at home can enjoy it more. We see first down lines, and umpire computer boxes, we see 360 replays in HD, we see every stat imaginable.

For the Derby we see a blob of brown horses, where even a seasoned observer has no idea where their horse is.

Think about someone watching a Derby for the first time. They have Brody's Cause as a magic square at their friend's Derby party.

Pop Quiz: Find me Brody's Cause. 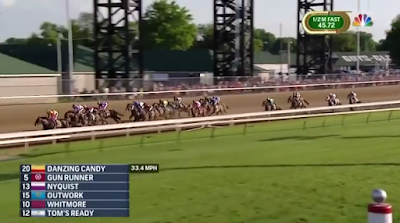 I, like a lot of you, watch the track feed for the Derby, and it's not because I am Travis Stone's cousin. At least with Trakus I can see something.

This is not only an issue with the Derby, try watching a UK 5 furlong race with 15 horses. Most people hope and prey there's a grey horse in the race, and they like him or her. It's easier to see roan in a blob of brown.

The sport of horse racing has 15 million people watching it one day a year -- Derby Day -- and the vast majority of those people (for a whole two minutes) have absolutely no idea where their horse is. At the conclusion of the race, millions of people are asking themselves, "what just happened?".

That's no way to sell a sport.

Enjoy your weekend everyone.

at May 13, 2016
Email ThisBlogThis!Share to TwitterShare to FacebookShare to Pinterest

This is all in a world where with rare exceptions, racetrack video coverage is mediocre. Even with Breeders Cup coverage, we only get at most one look at each horse pre-race, that in the post parade. There, we also typically don’t get shown any runner outside post position 10. Bad director, no biscuit!

I really liked the overhead shot of the Derby start. But if you want to track the whole field through the race, you need several cameras with feeds available to more than one monitor. But viewers don’t normally have multiple TVs running. Yet it should be possible to show different views at a simulcast site or online. And why not immediate whole race replays including isolated views while the chatter and interviews are just getting started? Sure, it would take more bodies to do the job, thus more $$$. Any football game has more cameras; why not the Derby, too?