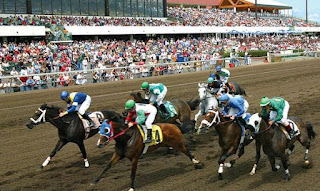 I was asked a couple of months ago what I thought Canterbury Park's handle would do this season. As most know, the Minnesota racetrack announced a takeout reduction; from the low 20's in exotics to 18%, and 17% to 15% in the straight pools.

The answer I gave was "I don't know." It's a small track, with small pools (where there is a struggle to get noticed) and the landscape for smaller racetracks this year has been soft. With so many factors at play I simply had no real guess.

What I can say, however, is the little track has been doing the right things, and bettors have been responding.

Although it is problematic to analyze micro results, or to get too concerned day to day - for example, I wondered why handle was off Saturday, but there was a $150,000 bridgejumper in 2015, and Saturday of 2016 was a quarterhorse day - we do have some data:

Currently from 2015, the track's Thoroughbred handle is up by about 4%. Its per entry handle is up about 10%.

Although that may not look like a big jump, given the circumstances, it is.

The entries and carded fields (partly because of fewer races on turf, but also other factors) have been really soft. Out of the 18 cards raced in 2016, 6 (33%) of them had fewer than 48 Thoroughbred entries. In 2015, no cards had under 48 entries.

During one of the cards with 43 entries, a player who is supporting the pools told me "unless I can find $500 in bets in the next two races, I won't be able to spend $2,000 today." The last two races had five horses in each, so I expect he did not succeed. That's big stuff to gamblers at almost any takeout rate or rebate level.

This is not a 'field size' issue in generic terms, though. When a track goes from a 9 horse race to a 7 horse race, handle does fall, of course, but it's almost linear. When 7 horse fields turn into to 3 or 4 horse fields -- like Canterbury has been scratched into several times this season -- it's crushing; trifecta and superfecta pools are cancelled. You can't even tread water by eliminating entire pools.

I would estimate that if Canterbury had done nothing for 2016, they would probably be down somewhere between 15% to 25% in handle this season. In fact, other tracks of their ilk, are struggling, despite fielding much more than 45 or 46 entries on a third of their cards. Small tracks overall, (those who have done less than $10M in 2016 so far) are down 10.35%. Tracks between $10M and $30M are down about 5%. It has not been a good year for smaller venues.

Canterbury Park should be encouraged at this early stage. They have done well promoting their racetrack, and have increased their handle under pretty poor circumstances. As well, it appears they stopped the bleeding; they lost revenue from handle in 2015 from 2014.

For those bettors who took a look at a couple of the 40 entry cards and were discouraged, that's improving, and should improve this summer.

For those who have not dove into the pools, take a look this Thursday and Friday, because I think it's a fun track to play, and you will be rewarding one who seems to care about its future and wants your business.

As for how much I think they'll be up in 2016, I still don't really know. Takeout reductions are usually long term in nature because of the value of churn and customer lifetime value, and in the short term there are many factors at play, just like there was a couple of months ago.

at June 20, 2016
Email ThisBlogThis!Share to TwitterShare to FacebookShare to Pinterest

Any idea how The Meadows is doing in Pennsylvania? It lowered take out this year, but I haven't found any reports on handle. The Meadows went from obscenely high to one of the lowest in North American harness racing.


Oh my god, can you people stop with the B.S. already?


Per-capita handle AT Cby is about thirty bucks, day in and day out. The fools running the show there don't seem to have been able to comprehend that to slice the takeout even in half this year, might have saved the locals $3.06 each for every day they attended and wagered the average amount.

Instead, Canterbury 'went cheap' on their live customers, and saved them an average of $1.17 each this year, and those customers are responding as they should (aka - not at all).

Now how about horse racing quit with the smoke and mirrors, pretending to give the public something significant while doing no such thing, and actually dooooooooooo something for the fan base, for a change???

That compared to the final Saturday in June a year ago:

Those fools handled more money on-track in 10 races, with higher takeout last year, than they did on-track with 11 races and lower takeout this year!!!


This all begs the question:

exactly how much money is Andy Asaro adding to the Canterbury mutuel pools on a daily basis????

You have something that has really hurt racing the last fifty years, in my view, and it's something many inside the business have.

'The status quo was great' disease. It's not.

Canterbury is up 6% per race.

If they did nothing, they would, like others, be hurting badly.

You seem to think doing nothing was 'good'. That revenues were going up, handle was skying, and all was well.

It wasn't. They'd be getting killed this year without this promotion.

Mature product life cycle companies either die slowly, or try and do something. Your track tried to do something. Let's hope the 6% gains turn into 16%, but please stop saying things are "fine" with the status quo. They aren't.

There again... a positive spin on something which doesn't warrant it.

Canterbury IS "getting killed" this year.

Their revenue-from-handle is battered far beyond that of the other tracks you mentioned.

You habitually demonstrate that you aren't completely understanding of the details of simulcast revenue, so it would help if you would read and understand the fine print relating to each of Canterbury's handle moves.


If you want to be impressed by Canterbury, then consider that they somehow manage to draw much larger crowds than do most comparable tracks. Consider, also, that the sky should be the limit for a place which need squeeze very little extra out of each attendee in order to greatly increase the average handle contribution per capita. With that awesome place to start, Canterbury still shows almost zero interest in focusing on their strengths rather than playing the smoke and mirrors card for you and I out here in simulcast world. Exactly how much money per card do you, or does Canterbury believe Andy Asaro is adding to their pools in 2016?

Also, the "status quo" has never been "great" in the simulcast era.


Yet once again Canterbury is a track still using smoke and mirrors to try to pretend they are giving something of substance to their could-be-if-only-they-would-play(ers) when the harsh reality remains the fact that they and all other present day venues are doing exactly nothing for any of their attendees.

In more simple terms, that is akin to a "guaranteed pool" (of some supposed-to-be-awe-inspiring number). There is exactly nothing to it. (Belmont lost $37K on one last month, but they've risked and lost more money on minus show pools)

Lowering the pick-twenty-nine takeout to 1% means nothing to the 99.98% of the fan base who will never cash a ticket.

So how about we all stop endorsing the smoke and mirrors approach and only applaud venues who consent to lift more than one finger to the racing fans?


And how about we enact this new standard before racing is completely dead?

So what do you suggest the tracks do to help the attendees and players? You rip all the tracks, but don't say what they could do better. Also explain how being up 6% is "killed"? I know with the lower takeout the aren't making as much, but being up 6% has to come close to covering that. Also you can't compare one specific day to another, it's apples to oranges. Weather has a huge effect on attendance and the live handle.

Canterbury is down in horses - worse than those two tracks are - and they are up 7%.

Up 7% with better takeout and promotion, or down 20 plus percent is the choice. It's not a choice between up 7% and flat.

They e had a really good meet, all things considered.