This week there are rumors (probably true rumors) that Hockey Night in Canada is replacing the young, hip anchor George Stroumboulopoulos with the (older, more generic) anchor he once replaced, Ron MacLean.

"Strombo" was tapped for the job when Rogers paid billions for the rights to the NHL a couple of seasons ago. Rogers wanted to expand the base, go younger (where have we heard this before?) and attract new viewers, so they made the hire, and the fire.

Traditional viewers (and in Canada, traditional hockey viewers are pretty much everyone) seemed to enjoy Ron MacLean. He knew hockey and we knew hockey. That resonated.

How much it resonated might surprise some (it surprised me).

Here's a poll from Toronto's largest newspaper, asking if hockey fans liked the move back to MacLean or not.

Those numbers are insane.

This is not too dissimilar to a take in Awful Announcing awhile back, talking about the dumbing down of tennis coverage, and using soccer as an example of a proper way to broadcast a sport.
In racing, this same type of issue rears its head. People do not like newbies asking newbie questions. A lot do not like fluff, or the incessant talking down to an audience. Some are generally angry that, even on niche coverage, spread pick 4 tickets and other hard to hit bets are created with no gambling skill, or gambling education accompanying it.

I get the Derby coverage. I get broadening the tent. But I think they have a point.

If racing wants to grow racing, that means growing betting on racing. Filling your booth with bettors who have a deep understanding of gambling along with handicapping, might just be something to think about.

At least that's the hope of the Canadian Football League as they and DraftKings announce a DFS partnership. For the first time, gamblers and fans can field CFL teams in cash games.

Already some in the industry are talking about the CFL. Yes, the CFL. 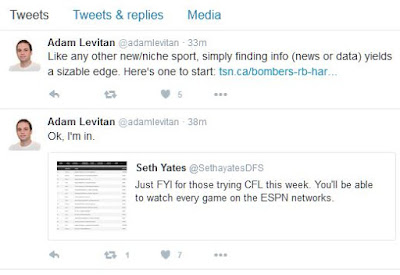 Users can i) watch the games on ESPN ii) Play the games on DraftKings and iii) Have access to stats, data and other tools to create their line-ups.

Meanwhile back at the racing ranch, the Derby Wars-Stronach Group suit looks like it's still in court, and new entities who want to create and resell handicapping products are treated like they're stealing something.

at June 22, 2016
Email ThisBlogThis!Share to TwitterShare to FacebookShare to Pinterest