As most everyone knows, California Chrome had yet another smashing victory on Saturday in the Pacific Classic at Del Mar.

Here are a few random thoughts on this lazy Monday morning.

With a slightly slow pace and Chrome getting things his own way, we read a few thoughts about how 'if' a rider did this, or 'if' someone did that, the result may have been different. I don't really get that. This horse was way too good for them on Saturday.

What's with the Dubai trip? The two best horses this season, certainly in the handicap division, are Frosted and California Chrome. The gazillion hour flight must freshen them up.

With big handles when he races, a lot of buzz, and his rightful place at the head of the class, California Chrome has proven to me that longevity means something in this sport. Chrome is entering Zenyatta territory in popularity, in my view, and those were and are the two most popular horses this century. American Pharoah, some thought a savior of sort when winning the elusive Triple Crown, drove column inches in a world where no one reads column inches anymore. Chrome and Zenyatta have a following, which is the result of frequent excellence over time.

The #Bringhomechrome facebook cult group might've had a point and we were all too dumb to listen. The Ascot trip seems like a distant memory. This horse's stud career is just fine. He's a five year old who is winning in dominant fashion and in good figures against nice dirt horses at home. He barely had to leave the barn.

Cj shows us a great career, and it's not over yet. I am happy he ran a nice figure on synth and turf so no one can say he was a surface specialist of some sort after only one or two tries. 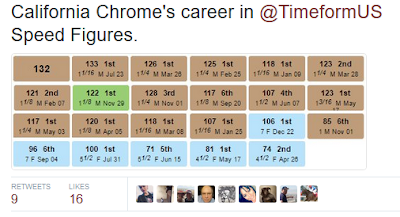 I -- like a bunch of you -- have always thought that American Pharoah was the faster horse at virtually any distance, but we might have to rethink that, don't we? This horse seems faster than ever right now, and his speed figures are very comparable to the Triple Crown winner's.

"When they ask about Chrome's legacy, I'm just hoping everybody can put everything in perspective," majority owner Perry Martin said, referencing runs the horse has made in which he lost ground. "If we were running him differently, he would own several records and people would think of him a little differently."

The more I read Perry Martin quotes, the more I realize I have no idea what he's talking about. His horse is number one in the NTRA poll, has won a $10M race, finished up a Triple Crown season with a spirited run in the Belmont with a bad wheel, has won on three surfaces at many tracks, has raced for years, while being in training for virtually his entire life. He's considered one of the fastest, saltiest, toughest dirt horses this century. Everyone loves him. If people thought of him "differently" they'd have to think he sucked.

Odds that the Kegasus Cup gets raced and Chrome is the favorite as a six year old? I wouldn't put it past him to be sound, racing, and the chalk.

at August 22, 2016
Email ThisBlogThis!Share to TwitterShare to FacebookShare to Pinterest

Very nice post--the only thing I might add is that I'd include Smarty Jones in the list of horses who were 'most popular in this century,' and one of the things that makes Chrome so special is that he wasn't simply retired after the Triple Crown like SJ. He reminds me very much of Seattle Slew, who also went through something of a rough patch after the Triple Crown campaign but whose races at four established just how special he was. Fortunately, with Chrome, we get that X2!

People thought that AP was faster than CC? Based on what? Or did you mean only as a 3yo?

Eric -- Great point. Smarty, for that short period of time, was remarkably popular. Probably rivaling Chrome, and he didn't even with the TC.

Well, color me skeptical. To be clear, I am willing to believe that AP ran faster than CC as a 3yo, but not by much. Why?

a) I don't trust TFUS numbers at all when it comes to top horses. They have wildly overrated more than a few in recent years, and their methodology is both young and unproven. Pace is a variable in their numbers, which is problematic in and of itself. Who is judging whether a horse was advantaged or disadvantaged by the pace of race, and how is it quantified? Please. AP set a good pace in the BCC, but was in complete control throughout. Dollars to doughnuts that TF considered it as a positive when calculating his fig, and I consider that to be a complete misunderstanding of how pace impacts a runner.

b) AP didn't run particularly "fast" for a top horse until the BC, as judged by the three long-standing, American figure makers. Even his BC numbers are dubious, given that it was the only race run at the distance, and that there was so much pressure to crown the king. Do you think it's a coincidence that Effinex, a yardstick if ever there were one, was assigned by far his highest figure in that race?

I am biased, because I too felt AP was running faster than the traditional figures were saying before the BC. So, I think TFUS had it correct. I think pace is quantifiable, and certainly energy distribution is, and I think TFUS does better than most. I think AP's BC run -- which most say was solid if not spectacular -- proved TFUS was more right than wrong, imo.

Effinex was in good form, and ran nicely a few weeks later in the Clark, which adds more evidence to my view.

Because we have so few data points with horses retiring early, this is always a struggle, as you know. But, personally, California Chrome didn't eye-pop to me until this season. AP eye-popped to me from day one. I don't think I am going out on a limb saying AP dusts CC with Bayern's trip in the BC two years ago, while this year, with CC having Bayern's trip and a three year old AP at his flank, I honestly can't predict who wins that race.

Interesting. On what basis do you believe that AP was running faster? Do you make your own figures? In any case, do you not find it very odd that all three would somehow have been underrating him?

There is no doubt that CC has improved this season, and is at the peak of his powers. Of course I can't say for certain who would have won between those two, but there is no doubt whatsoever that AP never faced anything remotely as good. Also, the only time that AP was taken out of his game, he was beaten by a vastly inferior horse.

Again, I'm not arguing that CC is necessarily the better horse (at five), but I find TFUS' ratings of top horses to be dubious at best.