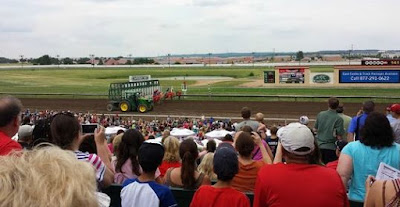 Handle was up 5% for the year, and about 10% on a per horse basis. For a small track these numbers are good, considering neighbor tracks were down double digits this season, and small tracks are getting eaten alive by the bigger signals in 2016.

Crunk has an eye-opening and very heady analysis here (give it a read, he did a much better job than I can here between meetings), so there's no need to delve much more into it. But a few of his points are worth repeating and analyzing.

They had some terrible luck, with almost one full card consisting of four and three horse fields. This season 138 races (about 15 or so cards worth) had six or fewer horses. Last season that number was about 30% lower.

Turf cards were washed out, some on their best night, Thursday. 43 turf races were off turf, versus 17 last season.

Using a little betting math, a 7% reduction in field size, apples to apples, year over year, handle should be down about 4%. When cards are washed out, more like 7% or 8% is probably a better estimate.

With neighbor tracks down about 15% or more, there's that to add to the equation.

With so much bet on track, bad weather is more important, too.

The 'Shakopee Bridgejumper' stayed home this year, which is good for the track, but bad for handle.

Doing nothing, standardized, one may expect a 10-15% decrease in handle, at a bare minimum. So, 5%, or 10% per entry up certainly (as O_Crunk concludes) was pretty good.

Folks asked me early on what I thought might happen this year and I honestly did not know. It's a small track, lowering takeout to a fair level (but not out of this world). If a gun was held to my head I answered that I thought 15% would be a nice gain. Considering the characteristics in Crunk's post, I am pretty happy with that estimate. I think that was probably in the ball park.

Where does the little track go from here? Who knows, but like I did this year, they will see some of my dollars at these takeout rates. I had a fun meet, and enjoyed the racing, when the sun was shining and the box was full.

I would like to make a note before I rush back off to work, on Canterbury itself:

A meet where people have fun; where the simulcast feed is filled with families on my screen watching horse racing, eating hot dogs and soaking it up; a place that has alternative gaming money and wants to use it to make the place fun and exciting and bettable; a place that seems to be doing everything they can to grow, to say "hey have a look at us"; is what horse racing is supposed to be. It's what we ask all tracks to do to promote this sport.

Hats off to them for trying. Canterbury should be very proud of their efforts and I wish this sport had a hundred tracks like them.

at September 20, 2016
Email ThisBlogThis!Share to TwitterShare to FacebookShare to Pinterest

Your post and Crunk's are very interesting; thanks for the analysis. One thing that sets Canterbury apart from almost all other tracks you guys compared them to is the amount of local support Cby generates. You mentioned it in the last patagraph, but really, it's the headline. That place is always crowded and even sells out on their festival days, even though they don't have giant million dollar type races. Getting people involved in the sport is the key to long term growth for not only Cby but the whole industry. And in that regard, Cby is one of the leading tracks.

The next step for Cby is educating the crowd how to handicap. Whenever I go there, the self-betting machines are nearly empty, and I usually get questions from locals such as "What does a show bet mean?". They're having fun - and that may be Cby's greatest accomplishment - but many, if not most, are completely unaware of the intricacies of the sport.

Crunk suggested they change racing days attract onlune betting, but realistically, that's a huge loser for Cby. Yes, more tracks need to follow Cby's lead, but takeout isn't Cby's strength. When tracks make the sport welcoming and just plain fun for the patrons, handle will follow, and that trickles to all other aspects of the industry.

So a loss of 20% of their on-track revenue from handle "was pretty good" ?


Exactly what figures would have to materialize for you to recognize complete failure?


I'm guessing the returns from the first couple of days at The Meadowlands warrant an Election night-like victory party in your estimation.

The Med numbers have been 'flat' against anything comparable from a year ago, and that despite the math on the takeout alone bringing with it a positive impact expectation.

Even the person who commented above could see that to assist the whole crowd should be the priority, and not the tiny sliver of people who would even care about takeout reduction.


You steadily compare the 'rake' in casino games, lottery, and other such ventures with that of horse racing, but they are incomparable given that none of the others utilize parimutuel wagering.

This allows you to conveniently ignore the fact that the impact of the tiny sliver of takeout followers on everybody else is essentially disastrous. This has you in the rare position of screaming "lower the takeout (for the tiny sliver of people who care)" while simultaneously implying "hike the takeout to unfathomable levels (on those brand new people playing Canterbury's product on-track)".

The entire racing picture is out-of-balance simply because racing leaders have failed to play to the strengths of parimutuel wagering and have instead worsened their own problem by pandering to the tiny sliver of people who have been effecting the very detriment of racing which they have spent so much time complaining about.


The person who commented above has it correct. It is time for Canterbury to make the vast majority of its on-track crowd the priority, instead of just leading them to slaughter again and again.