We saw, we came, Arrogate conquered.

Test your memory of the happenings on the weekend with the 9th Annual Post-Breeders' Cup Pop Quiz!

The attendance numbers at the Breeders Cup were tabulated by:

The Beholder-Songbird photo was taken by:

a) The Santa Anita photo computer, accurate to one one trillionth of a millimetre
b) A high speed canon, with frame speed used to photograph Usain Bolt.
c) A barn cat

Arrogate's top-shelf Classic run is being compared to:

This is a photo of the press:

a) Watching the Olympics
b) In the New York Times lunchroom, cheering the new Hillary polls
c) Seeing the free donut man come up the stairs
d) None of the above. If you are writing about horse racing, you like horse racing

Watching Arrogate and 'Chrome' come to the wire in the #BC16 Classic stretch. Who says there's no cheering in the press box? ;-) pic.twitter.com/dIPfQctA3X
— Jessica Chapel (@railbird) November 6, 2016

The new turf maintenance man at Santa Anita came over from:

The saddest news to come out of the Classic was:

The Turf course was so hard that:

a) Other hard objects orbited around it
b) Donald Trump called it soft, but actually issued a press release saying he was wrong
c) Andy Asaro protested because there's apparently another synthetic surface in California
d) Highland Reel went 2:23

a) One of the best races he's ever seen
b) Better than the Kentucky Derby
c) A world class event Santa Anita should be proud of
d) Not bad, considering it has half the purse of the Pegasus World Cup

Steve Coburn's prediction that California Chrome was a lock were made : 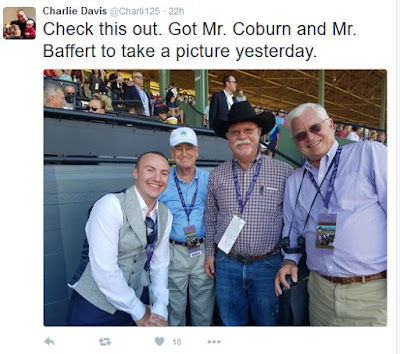 Enjoy your Monday everyone!

at November 07, 2016
Email ThisBlogThis!Share to TwitterShare to FacebookShare to Pinterest

Sam's Billiards is the greatest one-liner ever!!
Thanks for the Monday laughs.