California Racing at its Short-Sighted Best

The Bloodhorse had a summary story up on yesterday's CHRB meeting regarding advance deposit wagering.  If you are a wagering and gambling aficionado, read it at your own risk. It's extremely difficult to get through.

"There are concerns—with respect to charities, with respect to the board, with respect to other aspects of the industry—what are the ADWs prepared to (do)?" CHRB chairman Chuck Winner said at the Wednesday meeting. "Rather than us dictate what we think you ought to do within your licenses, it would be better if you made some recommendations to us, without telling us why you can't do those things."

It's essentially the same story from way back in 2010 when takeout was raised -- we need a bigger slice to survive, because we have costs. In a nutshell, in its simplest terms - this time they're after the ADW's for more money. 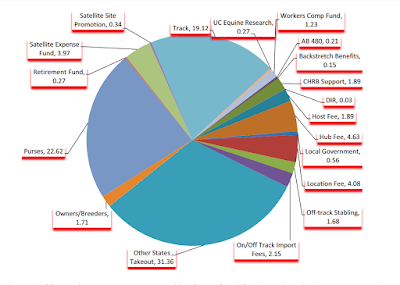 Many of the items that are being talked about today --  revenue for charity, etc -- are taken directly from takeout; that is, these things receive money directly from margin, and the revenue is solely based on how much is wagered (the handle). This is backwards from almost every business (revenue is maximized, profits are maximized and then the money is spent).

Many industry watchers in 2010 cautioned at that time, as wagering fell from a takeout hike, there would be less money for all these nooks and crannies from the margin. And that California would be back, cap in hand, looking for more money from somewhere to make up for it.

They are doing exactly that. And this time they are after the ADW's for more money.

The problem is, as accurately and eloquently stated by Twinspires and BetAmerica -- margins for them are already tight in California. So much so that taking a bet is almost revenue neutral for them.

"California puts (ADWs) at a disadvantage by strapping us with so many costs and not enough money to really do what we're able to do. ... If we were just operating in California, we could not justify that cost. California benefits from the costs we're incurring and we're having to make that up in other places," Blackwell said.

California racing has truly reached its zenith when it comes to grabbing what they can out of the shrinking pie. Bettors have now had more taken from them that they ever have (20.84% blended takeout); source market fees are high, TV fees and other fees have the resellers on razor thin margins. 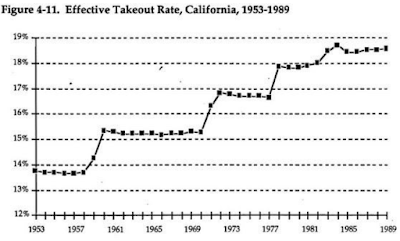 There's no one left with any money in their pockets to shake down.

I realize they're desperate, but what they are doing (and have done, over and over) doesn't work. It can never work. The only thing that will work, in my view, is more handle. What they are doing doesn't promote that, it does the opposite.

That's why, in 2016, California handle - which just seven short years ago was the highest of any state in the nation - will fall to 3rd, behind New York and Florida. 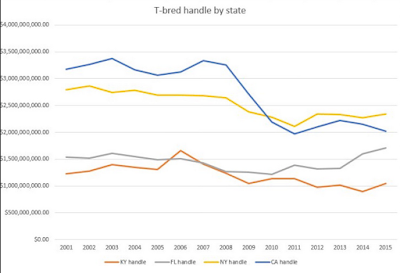 I am not here to offer a solution, because I don't have one. But I am sure of one thing: Shaking down ADW's (your needed resellers in a connected world) will not help the situation. In fact, it will cause that blue line above to continue to fall. And as history has proven again and again, that doesn't do anyone any good.

at December 15, 2016
Email ThisBlogThis!Share to TwitterShare to FacebookShare to Pinterest

I think that's total handle split up from California handle at all tracks, all sources.

The time series is wagering on tracks in the state in question.