Horse Racing (Somewhere Else) Quietly Invests Millions -- in the Customer

If you say the words 'more investment' to racing folks it usually means one thing -- increasing a purse. CHRB meetings, horsemen meetings, committee A, R and R42, are generally about finding ways to increase a purse. In some cases, like at the CHRB meeting last week with ADW margins, or the takeout hike in 2010, the money comes directly from the customer.

That's the broad definition of "investment" to the industry in North America. And we're not telling any tales out of school.

On this blog (and some other places) we often speak about investing in the customer. We do this for a few reasons:

i) Purses come (for the most part) from customers' betting of the races.
ii) Horse racing's gambling competitors are investing in customers. Some over 20% of revenues, or in hard times, like Atlantic City casinos, up to 40% of revenues (pdf).
iii) UI's, product offerings, betting instruments and delivery are all rapidly changing in a rapidly changing world.

The New Zealand Racing Board's strategy is something that's eye-opening. They have the same problems as anywhere - fewer customers, falling purses, a bad calendar/scheduling of racing for consumption, etc - but to fix them here is the plan for 2017-2019: 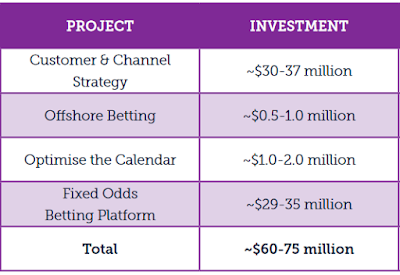 This is a $60-$75M investment in customer initiatives, because, "quite simply, in order to grow Net Profit, we need to drive even greater customer growth. The onus is on us to remain relevant with our customers in a rapidly changing, highly competitive international market.".

NZ Racing brings in $150M per year. This investment represents 17% of total industry revenue. This is tantamount to racing in California announcing at a CHRB meeting that they're investing $331 million over three years in customers (2015 figures). Cue the oooh's and ahhh's.

Today, New Zealand has begun implement one plank today, with the announcement of a new fixed odd betting platform.

Cost/benefit analysis shows that NZHR hopes to recoup the investment within four years, which is a fair to good payback rate for capital investment, and seems more likely than not.

"Multiple reports, some going back decades, have identified the systemic issues in the industry. Long-term under-investment, both in NZRB and the wider industry, has been a key cause of these challenges. We are now faced with systems and infrastructure so outdated, and sometimes even redundant, that our ability to operate in a competitive, vibrant industry is severely hamstrung," the report says.

Racing has the same issues here (think Equibase's lack of modernization for a changing customer base for one example), but it would rather up a purse from $30,000 to $32,000 for a short-term band-aid than investing in fixing them. It's probably the biggest strategic problem horse racing faces in North America, and I don't see it shifting anytime soon.


at December 20, 2016
Email ThisBlogThis!Share to TwitterShare to FacebookShare to Pinterest

Unless we can come up with strong, all-encompassing racing organizations, the industry will refuse to invest in the greater good.