March Madness is upon us. This thing with the non-paid semi-pro student athletes has grown leaps and bounds the last ten or twenty years. That's no secret I guess; all you have to do is search "bracketology" on google and the results will blow your mind.

What CBS and the NCAA et al have done is allowed the event to flourish. If you're gambling it, gamble away. If you are playing in an office pool, here's a printable bracket. If you want to partner up and offer ten billion dollars for a perfect bracket, knock yourself out, advertise away, it helps us. If you want to watch on TV, online, on smart phones or tablets, here's a link. 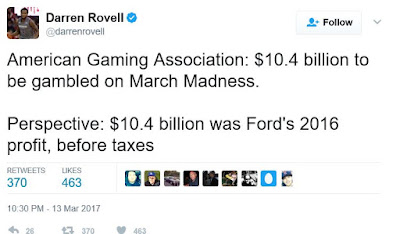 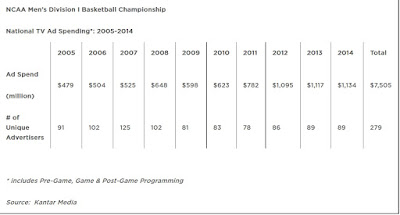 By allowing an ecosystem to flourish, its flourished. They aren't worried about the disparate A, B and C, they worry about the topline ABC's.

Racing, as we all know, doesn't work like that.

The first time something looks like it may flourish, racing tries to shut it down or tax it mercilessly, because it might 'hurt the high margin betting pools.'

Contests look interesting - we need to shut them down.

And my current favorite (keep in mind, this TDN article was published in 2017, not decades ago):

When racing encounters a new avenue to grow the sport in a big tent way - online, with "brackets", with new mediums to bet - it immediately turtles. Then it complains it has to pay to be on TV, can't attract new owners, and wagering is tanking because not enough people are interested in the sport.

You can't grow the tent if you're too frightened to pitch one.


at March 14, 2017
Email ThisBlogThis!Share to TwitterShare to FacebookShare to Pinterest