UK Rake Hikes - Tote Betting Has Its Place, But It Can't Be King

It was announced this week that (again) the UK tote has raised takeout on UK punters:

Although that might be a shockingly high increase to many of you, the UK tote - set up in the 1920's by Churchill to combat corruption in the betting pools - only represents 3% of the betting market (as of 2015).

The reasons for the hike are probably pretty obvious. In the unregulated, mature UK gambling market, products like fixed odds wagering and exchange wagering generate the most net worth to the punter. Customers flock to those high volume low takeout (overround) products -  $3 of every $4 are spent with fixed odds bookies and exchanges. Betfred (who runs the tote), appears to have decided in the sunset of their deal with racing, that the only strategy they have left is squeezing the lemon.

While the tote (for WPS betting) struggles, gross betting volume in the UK (despite falling field size to make owning horses more lucrative) has not been doing that poorly, as below. 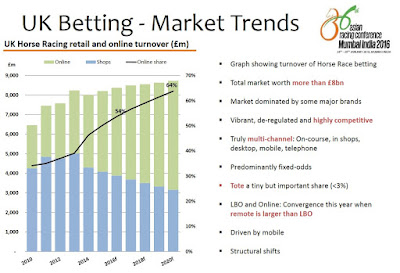 When I read comments about the tote in the UK, they are often about the fact that the takeout is "high like America" and because of that, it can supply more money to purses. Maybe that's true if you multiply current bookie volume by 19% instead of 4 or 5%, but it's a silly premise, as we all know. The tote has a place - international betting, Scoop Six and the like - but in the WPS pools, in my view, it's never going to work like they think.

Back in 2005 when folks were arguing about the tote (yes, they were arguing it way back then), a very sharp chap wrote this:

"The localised totalisator pool betting system is an anachronism that has been kept in place by antiquated monopolistic protectionist minset. It has and is continuing to fail both the horse racing industry at large and those that bet on the sport. A global, decentralised betting pool based upon betting exchange technology is the only way forward, but one suspects that the development of such will be held back by a combination of myopia, self-interest and inertia. Expect to hear lots of talk of legal, fiscal and technological barriers; and expect to see little action."

Betfred's takeout hike - because they can't make the system work in the UK - is strong evidence he was correct then, and now.

I suspect you'll see changes in the UK tote, making most of this takeout hike chatter pretty meaningless. But I don't think UK racing (and I am far from an expert, so take this post with a grain of salt) will grow if they try to shoehorn win betting punters, or exacta players into the tote system. It flies into the face of not only wagering economics, but also centuries of customer behavior, and that's a hard thing to overcome.

at June 13, 2017
Email ThisBlogThis!Share to TwitterShare to FacebookShare to Pinterest

Apparently the takeout on win betting was 13.5% through most of 2012. So this is the 2nd large increase in the last 5 years.