Over the last ten or so years the racing industry, and how it presents races, has gone through some changes. These aren't big changes, no, but they're incremental.

You've heard, no doubt, racetracks now talking a great deal about field size and presenting better races. This concept was not pushed nearly as hard decades ago, as racing was a slave to the putting on races and they will come narrative. Southern California racing, along with the races at now defunct Bay Meadows, were the prime examples of that.

Yet another example I've seen, is the scheduling of races.

I remember years and years ago watching the Breeders Cup, while at the same time watching Woodbine, which I played religiously when they were featured on Betfair. Without a word of a lie, the gates for a race at Woodbine and the Breeders' Cup Marathon sprung at exactly the same time. I couldn't believe my eyes, but it's the way it was. Many tracks were operating in a vacuum.

You've read complaints about the scheduling of races from bettors for years. These were not uncommon problems in the trenches.

Fast forwarding to today, I received a spreadsheet from a friend yesterday (thanks Mike) where he examined and detailed a lot about the BC races, including off times at other racetracks. Here's the off time grid: 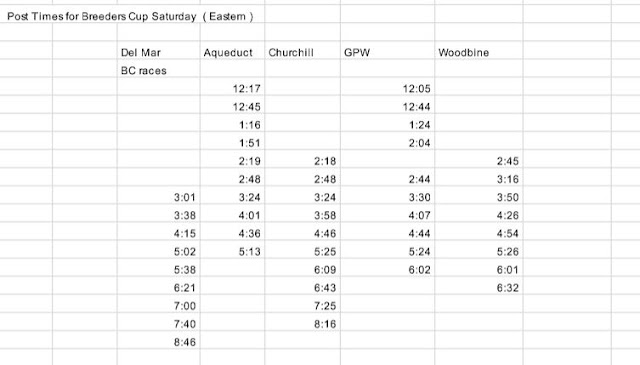 This, nowadays, doesn't look much different than it has for many years among the top racetracks in the UK. There was very little overlap between Del Mar, Aqueduct, Woodbine and Gulfstream, and supply was increased, to a customer base willing to play the races on an important day.

We see this incremental improvement elsewhere too. Gulfstream has maximized their reach with good results. Tracks like Canterbury who had myriad problems last season were forced to study them deeply and improved in 2017 (it's sad they raised juice back up or it really would've improved) and so on.

This concept, firing bullets instead of cannonballs, is done in the corporate world all the time, and racing has been finally catching up.

So, the business has gotten better at maximizing reach. They've gotten better putting on better races. They, like Magna, have increased their audience by exporting to other countries. They schedule things much, much better to extract more dollars for customers.

But still, there is no real growth, and new customers are not responding. Handle over the last three years will be near flat, and when looked at with inflation, it's negative. Is the glass half full - firing bullets is helping the sport grow-  or half empty - despite doing things much better than they were ten years ago, there's still no growth? Time will tell.


at November 07, 2017
Email ThisBlogThis!Share to TwitterShare to FacebookShare to Pinterest