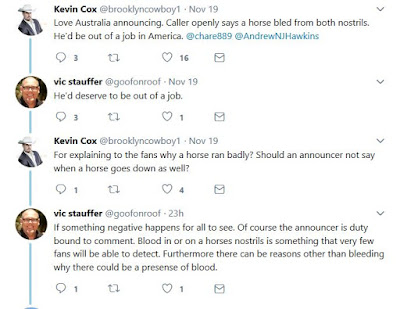 I followed along with an interesting twitter conversation this weekend between several insiders talking about what should, and should not be spoken about publicly.

In this case, it was about an Australian caller talking about a horse bleeding from EIPH, something fairly common in horse racing. Vic believed if he did it in North America, he might be out of a job. He may be right.

Australia is a very mature racing and betting market, and like the UK and some other jurisdictions, both fans and gamblers understand the implications and causes of bleeds. When an announcer or commentator mentions it, well, it's kind of old hat. It's not too much unlike an NFL announcer talking about concussion protocols because it's "part of the game". I suppose Roger Goodell could call Jim Nantz and get him fired for talking about it, but since everyone knows the concussion issues in the NFL, it wouldn't do much good.

In Thoroughbred racing in North America, however, it's almost sacrosanct not to mention something like this. Probably because someone could be listening, and if they are, they'll learn everything is not roses and lollipops. This, to many in the sport, is big time trouble.

Flipping over to a sport a little more down the curve - I've always thought harness racing is a leading indicator for Thoroughbred racing - it's a little more open, and transparent. Harness racing's struggles are for all to see, and the protagonists don't seem to care all that much.

This weekend in Harness Racing Update, the letters to the editor were flying. Joe Faraldo - leader of a New York horsemen group, called Meadowlands Racetrack owner Jeff Gural a "punk" for suggesting that if drivers want to participate in his $12M stakes program, they should race at his track.

As most know, this is something that has stuck in Gural's craw for some time. He's been propping up the stakes schedule and his overnight purses are a fraction of what they are across the river at slots-filled Yonkers. Because of these low purses, drivers - who are independent contractors - have been leaving his track more and more often. Then, of course, when the money gets better they parachute back to the stakes program.

Gural really isn't doing too much out of school here, and such deals can be common in the rest of the world with privately owned racing clubs, but to say it doesn't sit well with a lot of people is an understatement.

Regardless, this fight is open and transparent, and in the end, you'd hope when a policy is changed people know why, and got their say.

Further to that, Clay Horner, a big time Toronto lawyer and Chairman of the Woodbine Entertainment Group, continues to stoke the fires regarding trainers who have had some trouble (along with some miraculous training results), and the movement of their stock to switch barns for (mostly) stakes racing.
In Thoroughbred racing this thing happens as well - the Navarro situation is similar - but it's all kind of hush hush and no one in a position of power like Horner would say much. Even when Randy Moss casually mentioned the story on the Breeders Cup telecast, you could feel the industry cringe, praying for a quick throw to a Slim Fast commercial.

But in harness racing, it's boom just like that. There's a want (some might say a wish) to hammer home what some think are ruining the game, to improve the game. On the runner side there, in my view, is still a want, or a wish, that it simply all goes away.

Racing overseas is a mature market and they don't run away from publishing vet reports, fully disseminating and distributing news about drugs or positives, and being open with their seasoned fans and participants. Harness racing is a whole lot different. They have serious issues in terms of their  place in the betting marketplace, and relevance, but they too share a certain transparency.

Thoroughbred racing in North America has not followed those two sports. In my view they will at some point, but that point is probably not right around the corner. Until that day comes, expect more feel good news tweeted and facebooked regularly, and relegate yourself to the Thoroughbred Dark Web if you want to discuss many of the real issues.


at November 20, 2017
Email ThisBlogThis!Share to TwitterShare to FacebookShare to Pinterest