Happy Monday everyone. I hope everyone south of the border is enjoying their holiday Monday.

o_crunk has been tracking some neat stats on handle of late. In effect, the number of races offered has not trended handle up appreciably; or at least how many think it should. 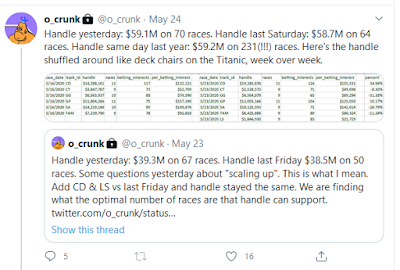 This seems counterintuitive - more races does mean more choice, which does mean more handle. But there are clearly diminishing returns and numerous other variables in play. One of the easiest ways to explain one large factor, in my view, is that bankrolls have not grown, and bankroll growth is needed to juice handles.

How do static bankrolls grow? Here's one way, back of the napkin:

That $3M is rebet 5 times and, for example, handle on the following day (or days) is theoretically $15M higher.

Leaving aside the revenue and profit questions with that example - handle growth is about new money, or old money spending more money.


Something I have noticed lately (maybe you have as well?), however, are the fields. I mean, these fields, especially at Churchill have been damn good. They're deep, interesting to handicap, and provide some value. We've long complained the races are carded to dole out slot money - short fields, racing for the sake of racing - but the set over the last month or two is anything but.


Sometimes I wonder if I am behind the curve on this blog (please, no jokes), and maybe I am with my previous post about spectators not being allowed back to the track any time soon. When I open the twitter I see more and more things opening here in North America, people are being pretty fast and loose with the rules, and there's been no significant resulting spike in infections from places that opened over a month ago. If things go well - still an "if" with some of the things we see passed around on social media - maybe I'm all wet. Barring a new wave of infections scaring people into their homes again, perhaps we'll be going to the races sooner rather than later?


As an aside, meaningful of nothing perhaps (it was a different time and different circumstance), I am reading a great book called The Splendid and the Vile, about the Battle of Britain and Churchill's leadership, decision making and home and life during it. With thousands of German planes relentlessly dropping thousands of bombs each evening - some many tons which could wipe out a city block - it struck me how Londoners lived their lives. They went to work each day, and a poll taken months after revealed that 71% slept in their own beds.

I suspect much of this came from leadership direction - Churchill was not surrendering and had the citizenry ready for a fight -  but as I read it, that leadership tapped into a free people's human desire to live life. Anyway, an aside like I said, but it's a strong spirit, and going to the track - and being allowed to should trends continue - might not be as far-fetched as I imagined last week.


One thing I don't think I was behind the curve on was Ontario Racing's curious decision to suspend the rules of racing and not allow qualifiers. Because, well, it's a qualifierpalooza everywhere else in North America. Racing continues at Scioto tonight by the way, in Ohio, where they qualified about 1,200 horses in less than a week.

As the braintrust in the province heads into today's strategy meeting, I hope they glance outside the bubble to see others have figured out this supposedly difficult chinese finger puzzle just fine. What Ontario displayed is, in my view, the opposite of leadership, it was appeasement. If it was 1940 I'm pretty sure we'd be all speaking German.


at May 25, 2020
Email ThisBlogThis!Share to TwitterShare to FacebookShare to Pinterest