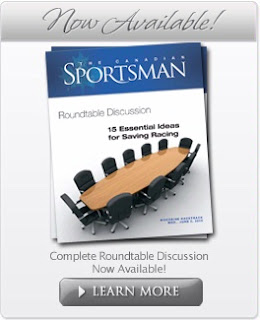 Last month the Canadian Sportsman magazine hosted a round table on harness racing. Some industry folks got together and hashed out some ideas. I found it pretty interesting, and perhaps you will too.

There was quite a bit of talk about some of the usual items, although (refreshingly I might add) there was a huge focus on customers. In addition there were quite a few "out there" ideas, which was also refreshing, whether you agree with them or not.

Will Woodbine cut takeout? Are there any ideas out there worth considering?

Here are some highlights:

Nick Eaves, CEO Woodbine: "... we, for one, can’t very well withstand
many more years of 10 and 11 per cent year-over-year declines on our live pool." And in addition (this will be shocking for horseplayers who have followed WEG for some time) ".... but we are pricing ourselves in a way that doesn’t have us being competitive ..... If we could eliminate [lower takeout by 2% on non-tris and 4% on tris], then we are bringing the pricing of our product into a zone that, at a minimum, is going to keep and perhaps have some of our core customers return."

Murray Brown, Hanover Shoe Farms, on an inside tidbit regarding the drop two seconds in a week trainers: "Three of the very, very biggest owners, probably the three people who control as many quality horses as any entities in the business, made the suggestion that they were going to tell their trainers not to allow their horses to be driven by drivers who drive for this particular trainer.”

Chris Roberts, Grand Pooh-bah Flammy and Georgian: "there is such a true lack of understanding in harness racing, in all horse racing, but certainly harness racing about what it is that we sell. And I continue to hear people in the industry who should know better but clearly don’t understand what it is that we actually are selling to customers that come through our door.

Hugh Mitchell, Head of Western Fair: "“Our industry is not agile enough. We are not market responsive, and change takes waiting. It is a bit like trying to turn around a 747 on a tennis court, due, in large part, because of the regulatory environment."

Alan Kirschenbaum , Screenwriter, horseplayer, commenting on TV handicappers and how we present racing on the air: "“Poker players have become celebrities.Why can’t our big personalities, who are gamblers, be presented in the same way? I would rather watch some names that would send chills down the spine of people (in this discussion) between the races, talking about losing tickets, winning tickets and things like that. I have a friend I went to college with named Alan Boston,who is a poker player and a college basketball expert and a gambler, who is a tremendously entertaining guy, who would be better on shows than any of these people. You know, the Woodbine people would probably throw up, but put Bert Smith on TV, put my friend Alan Boston on TV, put Dan Nance from one of the bulletin boards on TV, because they are galvanizing people the same way." *

For a look at the full transcript (those above comments are only a slice, and only a couple of the people who participated) click here (it's a pdf).

* PTP Note: for a decent book on gambling that profiled Alan Boston that Alan K. alluded to above, try The Odds, if you are interested. Quite the read!
at July 26, 2010
Email ThisBlogThis!Share to TwitterShare to FacebookShare to Pinterest

Bert Smith on TV? I think it would drive half the audience nuts. The other half, maybe not.... they might tell friends.