Ratings Are In: Focusing on Television Red Herring

The overnight ratings are in, and the Derby was down 13% since 2010, and viewership hit a six year low.

In other news, attendance records were set this season and the handle was up 13.2% setting another record.

How can this be? I thought television was bringing in fans, which is why our industry wrings their hands over mainstream TV time so often? We spent money on preps, so that money should've translated to TV viewers for the Big Day in big numbers, shouldn't it have?

I wrote this last year wondering about the push on TV from racing:

It is not like football or baseball, because those sports' do not make money when we play them. Racing makes money when we play it (e.g. when we buy a horse or bet a horse)...... spending scarce funds on the conduit of television, in my opinion, is putting the cart before the horse. We need to find a way to present racing that sticks with new viewers, and gets them to participate in the racing conversation, in some way, with us.

I think we are seeing that work right before our eyes, and it really didn't cost us very much at all.

This week on social media, the Derby was everywhere. There were people participating in the conversation. There were free past performances, there were good bets and deep fields, there were free replays on youtube of preps (remember when we used to hide those so often due to "copyright", like anyone cared?).

What about ADW's? If you read the mainstream horsemen press you'd think they are the devil. I counted several promoting the hell out of the race, offering most of their share of the rake to players as cash back. It's a shame Churchill Downs Inc seems to be in protection mode with some of these by not filtering out their signal to all.

There was a buzz about the Derby - virtually everywhere - and it was infectious. You couldn't help but join in.

Via Social Mention yesterday, even after the Derby was complete, here were some numbers. 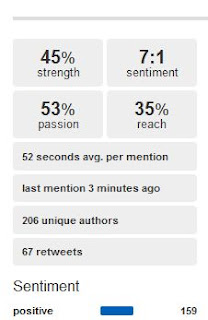 The passion and sentiment numbers are superb - greater than NHL hockey - and the reach numbers are on par with major sporting events.

That represents a 633% year over year growth.

Mentions were up, buzz was up, handle was up, attendance was up, news items were up, searches on the web (with preliminary numbers) were up.

I didn't think TV was the strategic answer for this sport for a long while. And I sure don't think so now, as I see these numbers. I believe we can pivot strategy easily with our scarce dollars, and I think we should.


at May 07, 2012
Email ThisBlogThis!Share to TwitterShare to FacebookShare to Pinterest

The TV Rating for the Derby was still not bad at all when you consider that the Derby was opposite Game 3 of the NBA first-round playoff series between the Memphis Grizzlies and Los Angeles Clippers (with Blake Griffin, who is quickly becoming one of the NBA's biggest starts) on ESPN, and that was actually the second game of a doubleheader where Game 1 (Game 4 of Indiana Pacers at Orlando Magic) went to overtime, with a lot of people simply staying with ESPN for Grizzlies-Clippers afterwards. The NBA's TV ratings have shot up like a rocket ever since LeBron James made his "decision" to go to the Miami Heat two summers ago, and it appears not even a lockout has hurt the NBA at all (and in fact may have helped given the NBA regular season this year began on Christmas Day, which is usually when more casual sports fans start to really care about the NBA). In this environment, and especially opposite an NBA playoff game when the NBA has again become "fashionable," a 9.0 rating is very solid and likely would have had the Derby in the top 5 TV shows of the week had it aired in prime time (as except for sports and certain event programming, TV ratings have in recent years have fallen off a cliff).

My opinion has been for some time that the Derby would do at least the same numbers if it is moved to prime time (most likely if so on NBC from 7:00-10:00 PM Eastern Time, post time at 9:30 PM ET with the Kentucky Oaks on Friday also in prime time on NBC from 10-11:00 PM ET, Oaks post time 10:35 PM ET in that scenario), which would be good for NBC because that would mean the number would qualify for the prime time TV ratings during the "May Sweeps." The only reasons this year in my opinion Churchill Downs did not make the shift to a nighttime Derby that I thought would happen had to do with two factors:

1. The NBA Lockout pushing the start of the NBA Playoffs back one week. This caused the NBA to be in the middle of the first round (this weekend had Games 3 and 4 of most playoff series) as opposed to this being a "dead" Saturday for the NBA barring any first-round Game 7s being necessary on the Saturday of the Derby.

2. Major concerns a much-anticipated boxing bout between Floyd Mayweather, Jr. and Manny Pacquiao would not only happen, but be scheduled for this past Saturday night (May 5) at the time a decision had to be made on whether or not to make the Derby a prime time event. If that boxing match ever happens, it is expected to shatter ALL records for pay-per-view events by a lot.

Both Churchill officials and NBC likely had to be concerned at the time the decision was made to stay with the Derby where it has been in recent years (early evening east coast time) that by moving it under the lights this year, it would have created a major conflict with a Mayweather-Pacquiao match should that have been scheduled for that same night since although the match itself would have not been until around 11:00 PM Eastern Time (if not later), the pay-per-view telecast itself would have started at 9:00 PM Eastern Time if not earlier. That would have created a big problem if the Derby had been scheduled for a 9:30 PM post time as though not at Churchill Downs, many simulcast and off-track locations along with bars and other places that normally host Derby parties would have had a big conflict with those who were specifically going to such locations to see such a fight.

I'm sure those on top at NBC Sports are quite pleased with a 9.0 rating for the Derby telecast given the current television environment. It is still far and away better than just about any other program that can air on a Saturday in mid-Spring, especially given how popular the NBA has become once again in the last two years.

The only stumbling block I see with that is that the handle trend has gone up as has the attendance. In a record year like the last couple, you'd think we'd see TV have more viewers too?

It seems to be a statistical disconnect, in my opinion.

Thanks for this post Pull the Pocket. I think you have really hit on something of significance not only to racing but to the entire horse sports industry. The sport of horse showing is in even more desperate need to build fan base, especially in the younger demographics. With TV being pay to play, most shows lack the budget/sponsors, therefore your idea of a true media mash up is sage commentary. Now if we can just get the good ole boys on board..