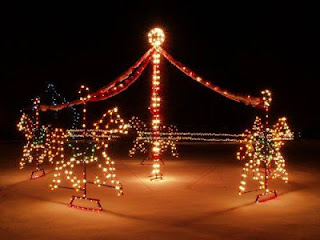 In 2009, visiting a chat board before the Breeders Cup you'd hear some laments about the event being held at Santa Anita.

"The Classic is boring. We have Euro's and turf horses and Zenyatta, but it is not our Classic because of the fake stuff"

"There are some jockey races here, because you have to be tactical"

Yesterday you got what you wished for. The Santa Anita track played like Daytona Speedway. If you wanted to ride tactically, or had a closer, you should've never even showed up.

Fort Larned and Mucho Macho Man played ring around the rosie. It was 7 lengths back to third.

The Juvy was a barnburner. 22 and 45, with splits of 23, 24 and 27, with a cavalry charge that never materialized. 144.58, with horses looking so tired it looked like the Marathon, not a mile and a sixteenth.

A Dirt Mile with the speed of the speed winning easily at 15-1. If you expected a closer here, the best you got was an even inside trip for the aptly named Rail Trip to come second.

A wonderful performance by Groupie Doll. She was wide and a few lengths off, which might be death for some horses on this track, but she got the job done. She might've been ten the best to do what she did.

You might think I am here to slag Santa Anita or complain about the results as a handicapper. I'm not. Just like in 2009 where my response to any complaints was "adjust your handicapping", the same applied yesterday. I have always been of the handicapping mind that horse's could run on cottage cheese and we'd watch the way the cottage cheese was playing, and then go bet. I enjoyed the day as a bettor just fine, and bettors will bet the big pools and deep fields of the Breeders Cup no matter what.

However, as a fan, I do see a few problems.

Will any Euro horse show up to race in the Classic at this track? Could you imagine if somehow Frankel was enticed to come, he laid back about six off the pace and was defeated by Fort Larned on a biased track? "Perfect record screwed by the American Dirt Cowboys" would be the headline.

No wonder they said when they saw the race on dirt they weren't coming, for certain.

Did the best horses win the races yesterday for Eclipse voting, or did some horses who might've won on a fair track race poorly?

We'll never know, but the Breeders Cup has tried (I would argue successfully) to be a world wide event, with world wide talent. This event at Santa Anita, I believe, set that back some.

Many people will say "who cares" and maybe they're right. Perhaps an event on a dirt speedway with speed horses going like a quarter horse and staggering home is what American racing is, and what bettors want. If that's true, give a gold star to Santa Anita - they succeeded.

Handle was down quite a bit yesterday. If anyone wanted to use the track as an excuse for handle, they can. I think it had more to do with the lack of buzz and the weather issues..

There were no "tragedies", stretch drives of the two year old races were not pictures from a Lon Cheney movie, the red cross was not called for horse transfusions. Although Mark Casse reported one of his horses bled, since she raced so poorly and apparently was a "3", she probably would've bled with lasix, too. You'll probably hear more about "specs of blood" via scope, but that's expected even in some races with lasix being used. Much ado about nothing and the chicken littles were showing their bias for the status quo, not talking reality.

I'm still lost on Dullahan. He is so fast, and has such a huge move I can not believe his last two races. He was being asked at the 7/8's again yesterday and that's not him. If over the next bit they find a small hairline or something on this colt I would not be surprised.

George Vancouver, the highest fig of the Euros was third choice among them. I find that curious.

I hope TVG is back on the track feed soon, or the BC smartens up and let's both networks cover the event.

Betfair in running was bet fairly heavily and there were some opportunities. Perhaps the most interesting was Shanghai Bobby who looked done in the middle of the lane before coming back on. A friend who plays professionally at Betfair took a bath on that.

Overall the interest at Betfair was good. Almost every race had a tight, interesting array, with plenty of volume. The bias with the Euro's showed, not giving Wise Dan too much respect.

Bob Baffert wanted a dirt track to replace poly. He wanted a rider switch and replaced Chantal with Bejarano. He got both. Ironically, Game on Dude yesterday got either i) bit by a speed track or ii) got a bad ride. Irony.

Animal Kingdom is a hell of a nice racehorse.

Speaking of Wise Dan, does anyone want to see him race Frankel after that at a mile? Count me as one.


Have a great day everyone.

at November 04, 2012
Email ThisBlogThis!Share to TwitterShare to FacebookShare to Pinterest