Standardbred Canada Jumps the Shark & The Truth About Slots

We've all read the stories. Cangamble even did a post about some of them titled "C'mon Man".

Ironically, the ESPN "article" written on Standardbred Canada yesterday took it to a whole new level.  The opinion piece designed as an article, I believe, does more harm than good. I think they're jumping the shark.

There has been so much written about the OLG and Liberal government's decision to end the program it can make your head spin. Opinion pieces like the above disguised as "news" rule the day. It's even gotten more brazen of late, as people sit around a table with the same opinion, which only solidifies it more and makes it more insular. No wonder everyone is confused.

It doesn't have to be that way if you look at the "facts". This is a simple piece of legislation.

The OLG "modernizing" of gaming simply means expanding gaming so the Province can make more money. In fact, ending the slots at racetrack program and increasing supply, in part, is projected to increase government revenues by $740 million per year. No matter what SC says, or comment after comment that you read in the industry press, that's what they're after. From the "2012 OLG Strategic Business Review"

This makes common sense, in fact.

Think about it. Right now they have 17 slots parlors and they have to give a whack to the city and to racetracks. They're hamstrung. This unleashes slots on the entire province, the private sector will pick up a lot of the costs and infrastructure and the government will take the money and run in a form of "licensing". They're following much of what British Columbia is doing. It's not new.

They clearly see some fruit on the tree. Per capita gambling revenues in Ontario are lagging: 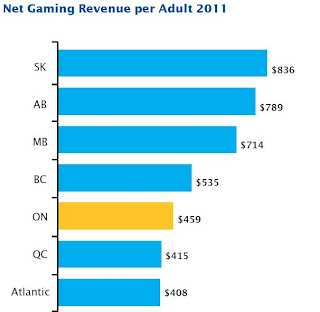 It sucks for me and you as an Ontario horse owner. It might not be fair. It has surely been implemented poorly. But it is certainly not "utterly senseless", "reckless" or anything else. It's what they think is good for their bottom line.

If the shoe was on the other foot it would sound like a great idea, wouldn't it?

What if there was no internet wagering for racetracks (just like you have to physically have to play slots) and there were 5 tracks in the Province. Of those five tracks $100M was bet, and racing owed a 20% fee to the government for all betting. Now, we in racing say "open it up, allow us to open 50 tracks, let us pay the expenses, and we will increase wagering and revenues".

That would sound like a good idea. 50 tracks surely will have more betting revenue than 5 tracks. I bet everyone in racing would love that idea.

That's what the government is doing, but they're doing it with slots.

The next time you read a Standardbred Canada story, don't get fired up and angry reading the editorial wrapped up as a news article. Don't get bogged down on subsidy revenue sharing talk. Don't worry about 47% or 75% or 10%.

Just remember: The Slots at Racetracks program is being cancelled for one reason and one reason only - So the government can expand gaming and make more money.

This is why I firmly believe the battle lies not with propoganda or calling people names in the press, but with sound logic. Do the people in this province want slots on every street corner? Do we want more and more of our hard-earned money going into a slot machine at a "bingo hall" down the street? I think the answer is no. Keep slots at a tightly controlled racetrack. Work the splits. That makes sense and, in my opinion, it's racings only worthwhile narrative to win the fight.


at December 29, 2012
Email ThisBlogThis!Share to TwitterShare to FacebookShare to Pinterest

With the industry press reporting pablum over and over again I don't think anyone in racing knows why the OLG is doing what they're doing.

How do you defeat an enemy when you don't know them?

"Do the people in this province want slots on every street corner?" Meh, probably not, but the current administration doesn't give a care in the world as to what the public thinks/wants, so why does that matter? "Do we want more and more of our hard-earned money going into a slot machine at a 'bingo hall' down the street?" The non-horse-racing people in Ontario really don't know and really couldn't care less. "Keep slots at a tightly controlled racetrack. Work the splits." Uh, yeah, sounds good. Good luck working those splits.