Last evening I saw on twitter that a horse in Southern California had broken down: 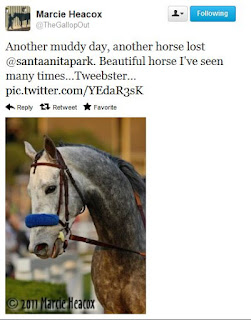 A few minutes later we learned the horse had earned some serious cash and was dropped into a $12,500 claimer. This drew the usual outrage.

Because trainer Bob Baffert is on twitter, his feed was talked about as well. Not long after the alleged euthanization occurred, Bob was tweeting about watching the football game. I assume he found this in bad taste when he saw the chatter about his broken down horse and deleted those tweets. But of course, they stay around. 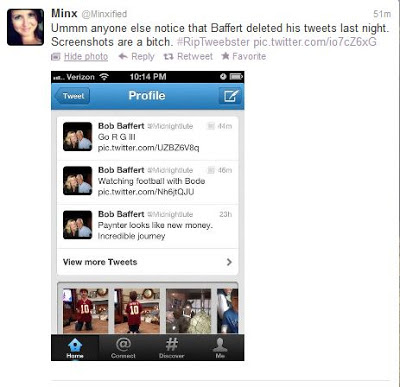 Let me stress: I do not know what happened in this case and I am making no judgement regarding Mr. Baffert or the owner. I don't know either way, and I am only reporting the above from what I've read on twitter.

However, and in general, dropping a horse down that may have problems is a part of racing. In the past when it happened, outrage of some sort would occur via a phone call or a grandstand conversation. Now the outrage is palpable and in-your-face on a social network like twitter.

Moral suasion occurs when " economically rational individual behaviours of economic agents do not maximise collective welfare. Moral suasion will therefore be a more effective policy tool if these rational economic agents can be persuaded that it is in their long-term interest to comply with the intended government policies, even when they are not profit-maximising in the short run."

I think twitter has become a moral suasion machine. If you want to maximize your stable profit, expect a pushback like the above. People are watching.

Maybe it's none of anyone's business. Maybe conclusions are jumped and it's unfair. But it's there. I think more and more people are thinking twice before dropping down a horse who's been good to them. It's not 1980, and the outrage does not happen in silence any longer. "Part of the game" doesn't necessarily mean "good for the game" and the people who feel that way now have a really big megaphone.


at December 31, 2012
Email ThisBlogThis!Share to TwitterShare to FacebookShare to Pinterest