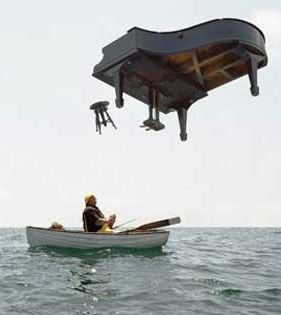 Continuing on the betting meme this week I thought we'd touch on Luck; not the HBO was-show, but the 'holy moly I just got hit by a piece of Skylab'' kind.

I was reading an article yesterday about close NFL games and the fact that statistically they're fairly random. They as compiled and studied by football's version of Bill James shows:

This helps, according to the author, explain the concept of clutch.

He explains that Eli Manning, quarterback of the Giants, is considered "clutch" because in the playoffs he won those close games. However, how he won them comes down to "luck".

"To give you a point of reference, a quarterback who has been especially lucky in these situations is Eli Manning, who has a 5-1 record in such games. ..... For example, had a punt not grazed Kyle Williams' leg, the Giants would have lost to the 49ers in the playoffs last year. Had Wes Welker caught a critical 2nd-and-11 pass in the Super Bowl, the Giants probably would have lost that game as well. Finally, if Brett Favre hadn't thrown a horrible interception in overtime of the 2007 NFC Championship Game, the Packers easily could have won that game.  Did Eli Manning have anything to do with those plays? No, he did not. But he still gets credit for leading his team to wins that should really be chalked up to luck. It's simply flawed logic; football is a team game. "

If a couple of random plays go the other way, he's 0.500, just like most others in those games. Arguably he would be 0-2 in Super Bowls and probably be called a "choker". Tom Brady is another example. After going 5-0 in close playoff games early in the 2000's, he is 2-4 in them now, twice losing to teams that were double digit underdogs. He didn't just lose his "clutchness", he is simply reverting back to the mean. It's expected.

In other words, we should never try and handicap, or make big decisions on luck, because you can't.

Similarly in horse racing, we get bit by "luck" all the time. How we handle it, either in our handicapping, or in our reaction to it when it goes against us can be the difference between winning and losing.

Top harness drivers drive thousands of races a year and by any statistical measure they're pretty close in terms of ability. What they all have in common is "luck". Sometimes they'll be in the wrong place at the wrong time, most times they'll give good drives. The best of the best might make 4 mistakes in 100 drives, the worst of the best six. It's negligible.

I have a friend who won't bet a certain very good driver, and I am sure you have friends who won't either. Same with jocks. Why? Because they bet them during one or two mistakes and never forgive them. The thing is, the "certain" drivers or jocks are usually different. Someone got bit by that random mistake that each of them may make.

They're letting "luck" - the random - along with a big dose of emotion cloud their judgement and that can cost them money.

100% of the time a head bob at the wire is random and luck. Often times we'll hear the "horse dug in and has heart". Heart because his random head bob hit the wire first? What if the other horse was carried four wide, checked at the top of the lane and lost the head bob? What if the wire was positioned a foot forward? Why should it even matter when at times both of the horses are wearing full cups and can't even see each other? Either of those horses could've won that race. The result doesn't make one a goat and one a champion.

Other things we have to deal with head bobs is that when we lose them we get upset. It throws us off our game.

Just like we should not put too much stock in Eli Manning's play alone, we shouldn't in head bobs either. We may lose one, but like with any random occurance, we'll win the next one. If we don't we'll win the next two, or three. It'll revert to the mean and there is no reason to get upset. Why cost yourself money by being miserable and getting thrown off your game if the result is random?

Other statistical anomalies will happen in betting the races we have to deal with. Like losing streaks and losing photos. This past weekend I bet seven horses in a stretch and went 0 wins, 6 seconds, and 0 thirds. I lost three photos (two of them at Tampa Bay where watching the replays I still think my horse won both). I could get upset, but that distribution is not normal. I will win as many photos as I will lose them over time. It means nothing.

I spoke to a friend recently that bets professionally. He recently went through a streak where he lost 56 straight win bets. Fifty six.

He did not change handicapping one bit. With a 20% hit rate a streak like that is expected to occur from time to time. It is what it is.

If we change our betting as a response to "luck" we should quit gambling on horses and hit the slots to play the machine in the corner because it looks "hot".

Whether we are handicapping players, horses or the circus that surrounds them both, it's best to not make proclamations about them without digging deeper. If there is a reason for something we adjust. If it's luck, we're better off turning the page and moving on.

Enjoy your Tuesday everyone.


at January 15, 2013
Email ThisBlogThis!Share to TwitterShare to FacebookShare to Pinterest

This is one of the rare cases in which I don't agree with your conclusion. While I do agree with your basic premise, that “bad beats” are likely to eventually even out over time, I would argue that you may be missing the bigger picture.

The skill to which I refer is the ability to identify both hot and cold streaks during their early stages, and adjust accordingly. This ability, when refined, can have a huge impact on the bottom-line.

The connection to your post is that when you speak of "luck", you do so in a dry, academic manner. That is understandable, but it fails to take into account that in horse racing, every participant (e.g. owners, trainers, riders, horseplayers, etc.) experiences streaks. And those streaks, while perhaps reasonably viewed as random from a statistical standpoint, can in fact be recognized and taken advantage of , irrespective of whether one views them as being related to luck.

In other words, convincing horseplayers that what they may consider to be bad luck is likely to even out on long-term statistical basis, and that they would be wise to act as your professional friend did during his 56 race cold streak, could well be a mistake in the context of what I have outlined above.

I am, in summary, suggesting that there actually is an intelligent and rational basis on which horseplayers might change their betting responses based on what is widely perceived to be “luck”.

Hmmm... I can understand that people shouldn't be ruled by luck and it's good to stick at something when you know you're on a good thing, despite the current results...

But when it comes to gambling, if any loss cannot be afforded, I think it shouldn't be done - luck or no!