Follow Friday & Remembering Everyone Shares A Love for Horses, And Horse Racing

Social media has changed the world, and horse racing is no exception. How we talk, communicate and relate, has never been easier. With that comes the expected spats, arguments and protracted chatter we all seem to either feel bad about later for acting so stupidly, or complain about. A lot of us are as guilty as the next person.

I had a chat - through a new crazy invention called a "phone" - the other day with someone I had heard about, not personally, but from social media. Like all too often, what we hear about a person, or what we see about them with one tweet or one facebook post, was not accurate. Our preconceived notions can be dispelled within about 30 seconds of real life communication.

I don't think I am a bad judge of character, and many people I speak with on social media are exactly as advertised (e.g I met my long time horse buying partner in the stable on a handicapping chat board, immediately liked him, felt he was honest as the day is long, and to this day he is exactly that). However, with 140 words or one heated discussion I can be as wrong as I am when I proclaimed Alpha was going to job in Derby 138.

This has happened to me a number of times, so I have tried to do better - to be more open minded when dealing with folks in the sport, via these new mediums.

I get a nice reminder each week from Penelope at America's Best Racing. She compiles a weekly "Notebook" of tweets and pictures and videos tweeted out by horse racing fans from not only America, but around the world. 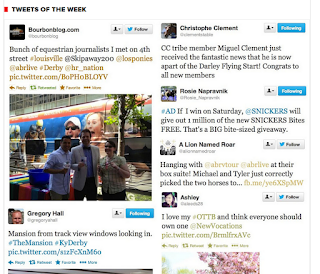 Each week I read the assembled messages; those from Greg, and Claire, and Sid and Ashley, and Rosie and everyone else (many of whom I do not follow on twitter). They all show a common denominator that brings us all together. A love for the sport of horse racing.  It doesn't mean we should all get along and knit peace quilts, or never have strong opinions and discussions - that happens in your local bar, in person on the street as well as on social media. But I try to never forget, no matter how frustrated I am with this business, no matter how much I want to pull my hair out at times, we're all on the same team.

Have a great Friday everyone.

Note: I don't really want to mention it, but I probably should. Trainer Bob Baffert received some bad information a couple of months ago about someone posing as his son on twitter being yours truly. I didn't take it personally, and try not to lose any sleep with these things - there's some single mom cashing in food stamps in New York City this morning, so things like this are so, so minor in the game of life. However, yesterday he tweeted to his followers he had made a mistake on it, apologized, and I want to say that I appreciated that very much. Thank you Bob.


at May 10, 2013
Email ThisBlogThis!Share to TwitterShare to FacebookShare to Pinterest

I agree about social media. It can be tempting to get out of hand over social media, but one has to remember that your Facebook/Twitter account is like a house with glass walls and no curtains--whatever you do there may be visible to everyone. And Kudos to Baffert for apologizing to you! I saw his apology this morning but didn't know what it was for. It takes guts to do that, IMO.