To me, it makes not much sense at all, and is excuse-ridden, in a game full of them when horse's who should not get beat, do.

Here is the quarter. Notice what path the winner, Oxbow is in. Now, notice where Orb is. 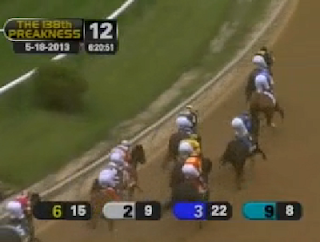 What's Oxbow, maybe the 'one and a half path'? Orb is not in a much different spot, maybe in the 'one and a quarter path' (as we grab a our handy protractor and do some grade 11 math).

Later on in the first turn, the Bloodhorse "Race Sequence" confirms this (Oxbow 6, Orb 1), as both Gary and Joel drift slightly off the inside path. Note that Rosie on Mylute (5) is hugging the wood. 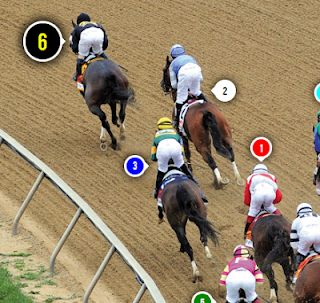 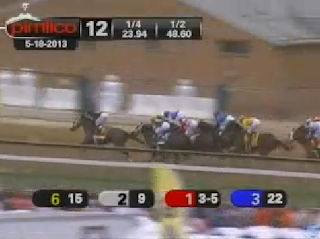 There's Oxbow on top again, in what looks like a two path. Behind him, about a half length from his tail, outside Goldencents, is Orb (he was actually closer than this, a fraction earlier). From this view it actually looks like Orb is slightly outside Oxbow's path. And obviously, he is not overly pace compromised here. He is almost on Oxbow's flank, and moved towards him in a slow 24.4 backstretch quarter. After briefly engaging Oxbow, in a half he can probably work in with Fat Albert on his back, Orb wants no part of it, and backs off for good.

Orb does not seem to be overly pace compromised, nor is he overly path compromised; he just seems uninterested. Add the fact that Mylute closed from well behind Orb, while racing the entire first three eighths along the wood, we have ourselves a real shindig.

I've read the analysis, I've watched the replays, I've deciphered the pictures. I do this for more than just the Preakness, because in betting I look for pace and path compromised or aided horses for a rebet or a fade. I also run weekly path and speed biases in my software. I see nothing of the kind in Orb's case.

Like I wrote after the race - like Secretariat or Monarchos in the Wood, or Blame in the JCGC, or your average every day filly at Mountaineer or Calder - sometimes horses don't fire. Orb probably did not fire his best shot. I find no reason to change that opinion.

at May 21, 2013
Email ThisBlogThis!Share to TwitterShare to FacebookShare to Pinterest

It wasn't Orb's day -- he is a good colt who ran great in the Derby and had a bad day in Baltimore. Seems like that should be the end of the story.

The post-Preakness chatter has been irritating. Not sure who annoys me more the "I told you so" peeps or the peeps who want to over-analyze why he lost.

Exactly-sometimes you just don't fire. Horses can't talk, but talk to well conditioned high performing cross country runners who every so often will run a clunker. Almost all say the same thing-they were ready for the race, they trained, they are fit, they are superior, but on that particular day for whatever reason, they just didn't have it.

As a horse owner I can attest to this. Some bettors think everyone knows after a race or before it, if an even money shot will win or lose. I've had plenty of even money shots that we think will win easily, who lose, without an explanation.

I'm a follower of one of the greatest handicapper's in North America, namely Joe Takach. Joe's core dictum was never never bet a horse that's "walking short". A 5 second perusal of the post parade revealed that ORB was indeed "walking short". As a result I held my money and made no bet, hence winning nothing and losing nothing.

For those of you saying ORB did not fire, I'm giving you the reason.
You're welcome.

You say you look for horses pace and path compromised. Well, you better look again at the Derby Path and Pace. Please look at the track in the stretch run. Please watch Joel Rosario take Orb out inside the 1/16th pole. Look at the track. The inside of that dam track was dead. Why doesnt anyone see this? Oxbox was up close to a very fast pace and stuck on the inside the whole way. He gets a "fair" track and able to set reasonable fractions and it's all over.

The outside of Churchill downs stretch run was very obviously packed down. Orb rode that part of the track into history. Now look at him. Yes, I cashed and Revolutionary will be next in the Belmont.

Oxbow's derby was a topic here on the blog in several post-Derby posts.

In the Pre-Preakness post, I mentioned Oxbow as a speed play.