Foiled Again Cements His Legend, Others Question the Captain's

Last night's TVG FFA Final at the Meadowlands was billed the race of the year and I really don't think that was too strong a wording. We'd get to see fast older pacers which is always a treat, but we'd also get to see them face North America's top three year old Captaintreacherous. Was the Captain as good as his 13 for 15 record suggested?

As most know, one of the big horses stamped himself an all time great, and his name is Foiled Again. The nine year old - making his 198th career start - took the lead around the half, backed down the three quarters (what a nice job by driver Yannick Gingras), and no one was catching him. His career earnings vaulted over $6 million, making him the highest money winning horse in harness racing history. 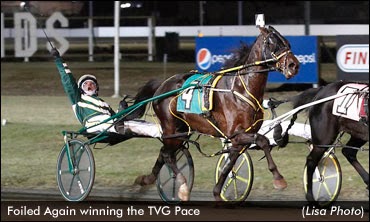 Right now, Foiled Again's popularity is at its zenith. In fact - as happens often when a popular horse wins and the euphoria of it is still on "ten" - people are now talking about him getting votes for Horse of the Year.

Conversely, the Captain's year, for some, is suddenly thrown into question. After getting towed into the race with a perfect second over trip, the Captain was ready to strike. Most everyone (you could hear Sam McKee almost willing it to happen), expected him to flip off that cover and come home, giving Folied Again a challenge. But that never happened. The Captain just spun his wheels, and not only did not hold his own, he was passed by horses, coming sixth.

I've been very consistent in judging the Captain this year. It's an opinion that I use for all horses in all restricted divisions every year.  With him, I did not buy into the superhorse narrative and if I dared say something like "he should've sprinted away from that horse but he barely held on under an all out drive" it cost me a few twitter followers, and got me flamed pretty good here in the comments section. Some insiders accused me of "never liking this horse" (I still don't understand why this brought such a visceral reaction from some of his fans). That was not true; I was just handicapping. Others who felt the same way, like the Racing Beard,  were just handicapping, too.  In fact, "not liking" or "hating" this horse is stupid language. I don't hate horses, and I think highly of the Captain; he's a good horse.

Last night and today, I find myself in the odd position of defending him. People are coming out of the woodwork all of a sudden saying "see I told you he was not that good". Other than the obvious - where were they before last night's race - it's folly to do that.

Is Pet Rock "no damn good" because he threw in a clunker last evening? Of course not. He is one of the finest four year old pacers to race since Real Desire; maybe better. The Captain, too, seemed to be not as his best, if you ask my opinion. I think he is talented enough to come third off that trip. Not only didn't he come third, he backed up getting picked off by Bolt the Duer, Sweet Lou and Modern Legend. I think he's better than that.

Whether that's right or wrong, it does not really matter to me. I have always said that I will wait until next year to judge where this colt fits. Just like we can not judge how good he is while racing against a crop that is suspect, we can't judge him on one race. I still believe he will have a tough time next year racing Open pacers - but I thought that before last night. Last night for some, it probably made them rethink "he's the second coming of his dad", but I since I was never one of those people in the first place, it had no real effect on me.

I am willing to give this horse a chance. He's a 147.1 pacer with a huge heart. And that's not chopped liver.

The handle for last night was around $3.5M, which I found a little soft, but still better than last month's Breeders Crown. The Big M put a lot of money in this race, in terms of marketing and such. I think they may be a little disappointed but I think they should hold their heads high. They all did a great job. Rome was not built in a day, and harness fans - long left out in the cold and ignored - all don't come roraring back in a week, or a month.

Reason #13421 fans are leaving? Market Share. Last week at 2-5, with new fans in the crowd for the opener, Boots takes him to the back and doesn't move until forever on a speed favoring track. This week? Right to the front. At PTP Downs, we pull a Hong Kong, get rid of this nonsense and finally show customers and their money some respect.

It's likely that Bee a Magician will be named Horse of the Year now. She capped off a 17 for 17 season, winning like she usually does - like it was a training mile. Although she has the same criticisms of the Captain - she is not racing much in terms of quality - it's how she does it that is eye-opening. She wins in world record times without even breaking a sweat.

The three year old filly pacing crop is a good one, and that's even without Iluvthenitelife. Shebestingin has found her feet and is starting to season. I look forward to seeing her face older mares.

Shake it Cerry is another horse making some noise. She is big and strong and looks very sound. I hope she's staked to the Hambo. Who knows.

Some folks think twitter is for trolls and sometimes that's correct (lord knows I can attest to that; I think I've been called every name in the book). However, when people disagree, if they do it with respect, you can find some great comments. Racing Beard made a respectful and honest comment to Yannick Gingras today on twitter. It shows just how good Foiled Again is. At the beginning of the year a lot of people thought he was possibly losing a step (me included). Never, ever count this horse out. He is an amazing specimen. One that we're lucky to be able to watch.

at December 01, 2013
Email ThisBlogThis!Share to TwitterShare to FacebookShare to Pinterest

Yeah, Yannick is my moral compass. He has made half a million this year driving horses and couldn't get enough press because he donated a days' pay to help a guy on life support. Twenty guys in PEI that race for ribbons--and wouldn't know Tony Colletta from Adam--raised 5K in a day or two-- and didn't seek any headlines. And although it's all warm and fuzzy this morning with Foiled Again, how can you respect a guy that --when it wasn't going all that well for Foiled for a month or so---decided it was justifiable to "jump ship", taking the 'now' horse for that period of time. Sickening!

This reminds me of the Academy Awards. Save your best for late in the year; being the freshest in everyone's mind gives you a big advantage. If Foiled Again's best form had been in July and August, consideration for HOY would have been very limited. He wins the last race of the year and suddenly the bandwagon has its springs tested. One race does not HOY make,especially considering that this was not all that spectacular an outing. His body of work in 2013 is impressive, but not HOY material.

Team Captain needs to get some press releases out & unleash their friends in the media.