I watched the Championship of Canadian Football  - the Grey Cup - like I usually do, because it is an interesting game and it is part of a culture. The game itself is unique, it's niche, it's different. But it's Canada and it has a history.

The CFL has had a resurgence the last half dozen years or so. TV ratings have skied (more people watch the Grey Cup in Canada than watch the Super Bowl now if you can believe it), attendance is up. This is very impressive for one reason, mainly: In the 1990's the niche league probably had a 30-70 chance of surviving.

If you think racing is "dead", it is probably much healthier today than the CFL was.

Numerous things occurred that helped pull the league from the doldrums, but there was one old axiom of marketing that led the charge: Be yourself because you can't market what you aren't. 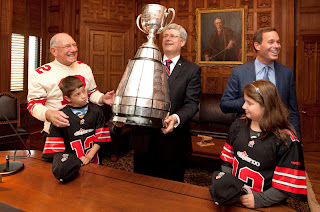 Their marketing moved on that meme. Canada's railway system linked the vast country together and was a major reason it became a country. The Grey Cup marched on a train tour across the entire nation. People touched the Cup and got to know it. It paraded up and down Yonge Street. Horse's from Calgary did too, adding more to the zeal of the event. The league didn't apologize for what it was - it markets what it always was.

As for the game itself, traditions that some might call "cheesy" - like the Governor General's ceremonial kickoff - were not buried, they were front and center. Interviews from polticians like PM Harper were not staged events, they were done on the field, and they talked about the game and its history as a part of the country's fabric. The PM even sat in the cheap seats, not in a plush box. New immigrants come to Toronto each day and they see a PM sitting with everyone else enjoying a uniquely Canadian event? Welcome to the Grey Cup.

That doesn't mean you don't go after new demographics, because you have to, especially when all eyes are on you. Justin Bieber did a halftime show, while the demo in the stands probably have never even heard one of his songs.

I was at Keeneland a couple of years ago and spent some time with horseplayer Mike Maloney. A good guy, great player who loves the game. We shared some racing stories over dinner one day about what it means to be a player, horse owner, and lover of the game. At one point he said "why do we try to out-casino a casino? Why do we try and be something we're not? We can't compete."

Racing does much better when it's just itself. It's no surprise the Kentucky Derby is a staple today - they'd fill the joint if twenty 5 claimers were racing on the First Saturday of May. The race is not raced in Manhattan, it's in Kentucky. Racing is a niche sport where people get together to see if my horse is faster than your horse, and it was never about restaurants or sheiks, it was about racing a horse. It's a gambling game that's a puzzle. It's as old as the day is long and it has a tremendous history.

Today Keeneland announced they were hosting the Breeders Cup in 2015. The video below is a marvelous piece of marketing. Horsemen from the UK, or Japan, or from the backwoods of Pennsylvania, or Texas can relate. Keeneland knows exactly who they are, and they are clearly embracing it.

Welcome to horse country, Breeders Cup. What took you so long to come back?

at June 24, 2014
Email ThisBlogThis!Share to TwitterShare to FacebookShare to Pinterest