There are two massive stories in Thoroughbred horse racing this summer. One, the most obvious, is American Pharoah's Triple Crown win. The other, not as obvious, but (from insiders anyway) just as interesting and talked about, is the revolving story of California Chrome.

The two parallels are the best of times, the worst of times, the age of wisdom and of foolishness, where everything was before us, yet nothing was. And most of it hinged on 18 feet.

California Chrome - since tearing his hoof and two length loss in the Triple Crown - has been through a whirlwind. He, to maximize his net worth at stud, had to try turf, was shipped to Dubai, then shipped to the UK, then shipped back to Chicago, again to try turf. Then, after a bone bruise was discovered in an examination by a stud farm, was turned out. There have been public grievances between owners and trainers, and one of the owners has been bought out. To (once again) maximize his net worth in the shed, a new chapter might be written as it looks like he will return as a five year old, if his body and attitude cooperates.

After all that, one hopes he may stand in Kentucky for $12,000 or so, and get a nice full book of mares. 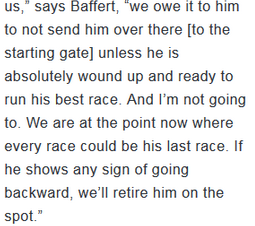 Meanwhile, American Pharoah didn't run into a bearcat, he didn't tear a hoof wall. He didn't flip a palate, or scope sick, in the Belmont Stakes. He came and conquered. He won. This win suddenly allowed him - if the deal that was structured, wasn't structured as it was, or completed - to happily ride off into the sunset and never race again, with wild (and possibly accurate) stud fee approximations in the $150,000 range. If he has a bad race - say like California Chrome had in the Pennsylvania Derby coming off his hoof repair and regrowth - he will be retired "on the spot", with a similar Frankel-like valuation.

No harm, no foul. No Dubai or Ascot to 'prove himself'.

This dichotomy is much more than about bloodlines, or connections (we all know American Pharoah would stand for a higher fee than Chrome if both lost the Belmont by two). It's about selling the sizzle. One horse needs to rekindle that sizzle with Dubai World Cup wins, beating the best turf horses in the world in million dollar races, and now a five year old racing season. The other will still be sizzling if he scopes sick in the Haskell and loses.

18 feet might as well be 18 miles when it comes to the path of these two horses. Thoroughbred horse racing, and the business of it, is never not fascinating.


at July 21, 2015
Email ThisBlogThis!Share to TwitterShare to FacebookShare to Pinterest

Can you please document your statement that California Chrome suffered a quarter crack? Where? When?

I don't think so, based on photo, comments of the farrier on my blog, verifying article specific to this subject in the Blood-Horse, etc.

Here's the direct quote from the post-race press conference as printed in the San Diego Tribune:

>>“He grabbed a quarter, probably leaving the gate, tore it off,” Sherman said, not blaming California Chrome’s loss on the cut hoof, but just stating the fact that his horse might have overstepped and struck himself in his front right foot with his hind foot while hustling out of the gate. “You can’t say that’s what cost him the race, but it didn’t help him. These injuries can take a month to 45 days to heal. There’s always fear of it turning into a quarter crack, and that can be serious.”<<

And here's the article in the Blood-Horse with Sherman confirming that it did not turn into a quarter crack:
http://www.bloodhorse.com/horse-racing/articles/85638/california-chrome-taking-it-easy-at-los-al

I realize that it can be confusing when they say a horse grabbed a quarter; it just means the part of the hoof wall in the heel area forward to the widest part of the foot. But when it is injured, as in a starting gate grab,the damage is usually to the fleshy part of the heel bulb and/or pastern above the coronet.

At the very least, horses don't suffer quarter cracks as a result of an injury. A quarter crack is much more serious, it is more like a stress fracture of the hoof wall--and never shall those two parts meet again. Part of the quarter (wall) can be ripped off in a traumatic injury, but it wouldn't be a quarter *crack*.

I would have written my stories differently if his Belmont heel bulb injury had turned into a quarter crack, and his foot problem in England would have been much more suspicious, and probably on the inside of his hoof, not the outside.

Thanks for clarifying where you found your reference. Hopefully the New York Times will correct that for the sake of the horse's reputation.

Whoops, tried to publish that last comment on my phone and accidentally deleted it :(

I should've done a better job researching, because it was pretty obvious it wasn't a quarter crack. My bad!

Thanks for the help.