California Chrome drew the 11 for the Dubai World Cup on Saturday. Despite a solid field, including American horses Keen Ice and Frosted, Chrome is the story.

As Claire Novak notes today, "there's something about Chrome" and there is. Yes, Kentucky Derby winners that race at a high level always have a strong pull (15 million people watch him win that race, more than any other in racing, by far), but this horse seems to have even more pull than that. He really stokes the fires in the sport, from the common fan to the bluest of bluebloods.

As an aside, who was the last Kentucky Derby winner to win a grade I race on dirt at five? I ask because I don't have the foggiest. The list must be short.

I think Frosted is a better horse right now, but I too am a Chromie (although a lesser one than those found on Facebook!) and will be cheering for him. Sound horses with personality are always a favorite of mine and I think the colt deserves another big win, on the big stage.

Keen Ice will try blinkers for the first time on Saturday, which tells us his flat effort in his last was not explained by a physical issue (none they could find, anyway).

Trying something for the "first time" in a 10 million dollar race is always something that makes me chuckle (remember, this happened with Palace Malice in the Derby). Thoroughbred horses just do not race enough anymore, so experimenting doesn't happen in an allowance or overnight, it happens in a big race.

In old time racing, or in current harness racing, you could or can try things in a race itself as a prep. In harness especially we all went/go through the "try these shoes, or this headpole, or murphy blind, or hood with cups, or half cups, or sliding blind or blind" to experiment, and if it didn't work you just switched back next week. Harness horses are much harder to train, but easier to experiment with.

I'm not sure what exactly the hike is, but Racetrackandy says DRF PP's have gone up in price and he's going to try TimeformUS. I find PP providers are like cable TV companies. When they get you used to their service, it is really hard to switch, and if you do switch, you are so used to the old way, the new way is hard to embrace. My advice for anyone switching to anything in handicapping, whether it be data, or PP's, new ADW's, or whatever, give it two months and stick with it. Only then you'll know if you like it or not. 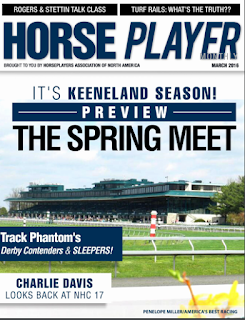 The March edition of the Horseplayer Monthly is out, and it's free. I save this mag to my iBooks on my Apple product (yes, I broke down and gave my money to the man) and peruse it as needed. It looks good on the iPad.

We had a fun little discussion last night on odd tracks - some of which are really odd. Tracks like Tyron, Grants Pass and Aiken all race in North America. So does the "Eastern Oregon Livestock Show" racetrack. Don't confuse it with the show on the west side of the state.

The Meadowlands ad in the Monthly magazine (above) is exactly what we should see from a racetrack trying to sell their place to bettors.


at March 24, 2016
Email ThisBlogThis!Share to TwitterShare to FacebookShare to Pinterest

Very good points about the "try something new" issue. And along those lines, Forego, to name just one, was "given" a race first time out. Not to cash a bet, but to give him a foundation on which to build, and so that he would come out of the race eager for more.

Trainers who insist on pushing horses to run as hard as they can in their first starts may be successful businessmen, but they are not good trainers.