The Party of No, Complicated Bets and a Tuesday Catch-Up

Paulick has a story up on exchange wagering - the buy and sell market that people call new, but is in fact old now - as well as a poll. The poll, "do you want to see exchange wagering in your state, yes or no", has the no side winning.

Question: Does any poll in horse racing that offers customers something new, at a better price, (or something else they want) ever not answer "no" from insiders?

I don't remember too many; which makes the lament, the hand-wringing, and the wonderment from insiders why handles have been down for 15 years all the more perplexing.

Racing builds walls, and customers pay for it. And I don't think Mexico will help. 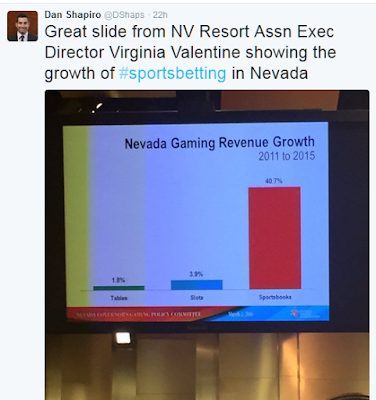 Meanwhile back at the ranch, sports betting is growing, by giving customers what they want. This has been happening in tandem with the massive rise of Daily Fantasy Sports (which did $3B in handle last year).

It amazes me that Daily Fantasy Sports - which did not even exist in any major way five years ago - and sports betting has grown so much in this space. At the same time, racing, with an Internet betting monopoly seems to be losing more and more market share.

What's easier to understand than 'pick the top three in this race and win money'?

To me, slots are complicated. I have no idea how to play those games; you know, the ones where you win on diagonal lines, or four corners, or whatever. I was at the convenience store the other day and had a look at some of the lotteries while I was waiting in line. I had an easier time understanding first year calculus. No, racing is not complicated; I think it's just another excuse.

CG also talks about drug use and it not having an effect on the players. Maybe so, but drug use has an effect on horse supply and ownership depth, which does influence handles. Three horses from one trainer and two from another in a seven horse field is commonplace and it makes for some pretty boring betting.

This weekend I enjoyed the racing, including the most-excellent performance by Songbird. There's some wondering if the Derby field will ever be fewer than twenty horses. I think not, because the ego gratification of having a Derby starter is too much, but what about the Oaks this year? I could see that being a six horse field. Who wants to face her?

CJ on the GP handicap this weekend, where Valid was badly interfered with by one of the Pletcher horses. 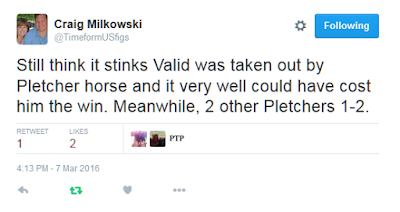 This is a little known rule, that could be enforced (but wasn't nearly enough) with coupled entries.

Peyton Manning retired and a lot of folks said "ho hum", as is often the case with some athletes. The sports world is filled with narratives, and if a negative narrative takes hold, it's hard to appreciate what we just watched.

By all means, Tigers Woods, Peyton Manning, Wayne Gretzky - whomever - can be disliked for whatever reason, but we can't forget how great they play or played the game. I find this is similar with horses. Sure we'll never know how good American Pharoah might've been, we see California Chrome not win a dirt race for awhile, and Zenyatta win some races on "plastic". But appreciating great horses - for their speed, longevity, moxy, will to win - is never a bad thing. When they're gone we miss them.

Unless the announcer idol thing in California was pre-determined, I think Michael Wrona will win the job.

The Meadowlands has a tough time this time of year with entries. They don't have slots, but the slots rich tracks that orbit around them do. One thing the Big M has, though, is handle. They keep leading the sport with customers, regardless, and it's not really that close.

Election betting is growing and it's never not fascinating. This year, however, the swings in the states have been flat out incredible. I've been doing this with a bankroll since 2000, and I have not seen anything like it.

Horses are animals and sometimes they lose their edge, sometimes something is bugging them where the world's best vets can't even find it. Sometimes they just need a break and that's what's happening with the Pizza Man off a couple of flat efforts. Horses are incredible beasts because they want to please and they run through maladies. But sometimes they just lose that punch, and that can mean a lot at the highest levels.

Harness racing can increase purses and bring in betting dollars, but grabbing a slice of those dollars for a CRM plan, or to sink some money into owner and customer cultivation seems like a non-starter. This was examined in Harness Racing Update, page six.

at March 08, 2016
Email ThisBlogThis!Share to TwitterShare to FacebookShare to Pinterest