Crowding Out the Little Guy: It Probably Does More Harm Than Good

The pizza industry is going through quite the shift of late in the US, with the big chains dominating the smaller ones. With only 48% of the restaurants, 61% of the revenues go to the big shops, and that number is growing; last year at a rate of over 7%, while mom and pop's saw their sales fall almost 2%.

Why is this happening? Better pizza? Are Americans ordering pizza more? According to the author above, it's not that, it's that the big chains can invest more and more money in technology, bringing the pizza to the customer. 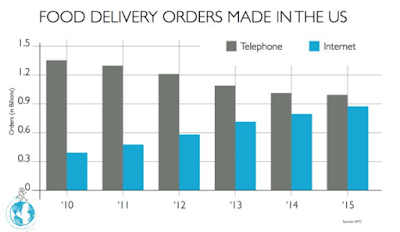 Domino's and Papa John's have been married to different ways to order over the web, including text, twitter and apps. Customers have embraced the new mediums.

Mom and pop pizzeria's can not invest in technology like the big dogs can. They suffer, and it's more than that - pizza sales can suffer as well. Despite the massive market share gains by the giants, pizza sales were down in 2015 versus 2014. It's shuffling the deck chairs, not growing new pizza fans.

The big dogs of Magna, Twinspires and TVG have an incredible advantage (in Canada it is even worse, with one track owned ADW with monopoly power) and are taking more and more ADW market share. They have both forward and backward linked, and two of the entities control their own content, allowing them to pick and choose what resellers can or can not show their signals. It's a tremendous competitive advantage and is more oligopoly than not.

This system crowds out new competitors in a far more troubling way than Domino's is crowding out Joe's Pizza. Small ADW's have been offering players price breaks in a way the big dogs won't, and that's been their niche. The more they get crowded out, the price sensitive market - and especially the cultivation of that market segment - gets crowded out, eliminating a potential growth segment.

The above, in my view, goes a long way in explaining how that with a near monopoly on online wagering, horse racing wagering overall has not grown. The tent has not broadened like it should, with innovation and price leading the way, it's been about barriers of entry and growing the individual tents of the biggest corporate entities. This shuffles wealth, it does not create it.

I'm a bit of a pizza-geek and when I go to a new town I often look at the reviews of the local eateries, searching out that gem who might make the world's best pie. With those restaurants going out of business, I won't pivot my dollars into the Domino's store on the end of the block. Similarly, if more and more small ADW's are not allowed content, or leave the business due to prohibitive barriers in a stacked-deck game, my dollars won't pivot to them either. For the good ship racing, that's a big problem.

at March 28, 2016
Email ThisBlogThis!Share to TwitterShare to FacebookShare to Pinterest

Magna isn't around anymore. It's the Stronach Group.

I had a very good pizza at a mom and pop shop 2 weeks ago. It cost about 6 bucks more than dominos or Papa John's. That probably hurts them some also.

No reason to play the "big" guys...for ex...123bet, watchandwager give better bonuses than all these big guys...and on watchandwager can even bet all tracks