It's one week until the Derby, where drunk people, rich people, sororities at almost every University, and others get together to watch, wager, take molly, drink juleps, wear hats, have parking issues, and partake in the annual Kentucky horse racing tradition.

I have scanned the big websites, read almost all social media and was very surprised that there are not a lot of people giving their thoughts on this year's Run for the Roses. It's like no one has an opinion! So in my never ending search for traffic, I decided to pop up a handicapping post. I think this post will help both new fans and old salty handicappers land on a winner.

As most know, physicality is important for handicapping (Leadbetter, et al). A lesser known angle is watching how a horse reacts while getting soapy water thrown on him. As long time handicapper Jessica notes, it can be a key to unlocking Derby betting fortune. 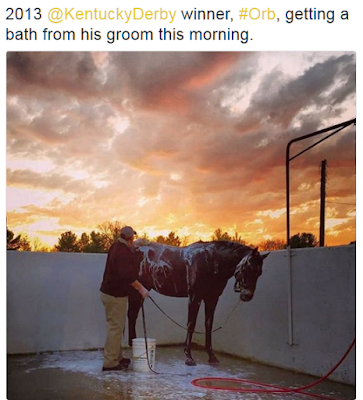 This picture shows just how powerful a handicapping angle this is. Is that a horse or a fish? Notice the head down, like Orb is ready to run. Take a look at the lead, it's not taut, it's loose; "be free boy!". Orb is saying "more bath, more bath please, human handler." This is a standout look. And this is why he won the Kentucky Derby.

Now we'll move on to this year's field. 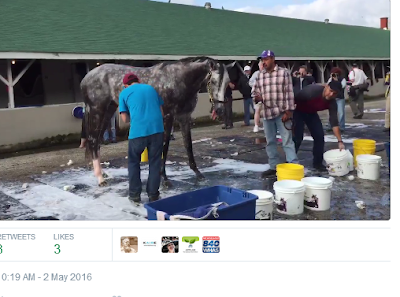 This folks, is H2O-glorious. Check out the tongue; we've got plenty of activity. All we see is a horse who is loving every minute of it. Creator is so calm he could've played the War Horse in the movie The War Horse. He spends weekends at farmer's markets sniffing handmade soaps, his favorite band is Aqua. I've run out of metaphors. This colt is the real deal.

Next, we have an update for Wednesday, that seems like a Twitter-meme of some sort with the millennial type twitter people, of which I am not. 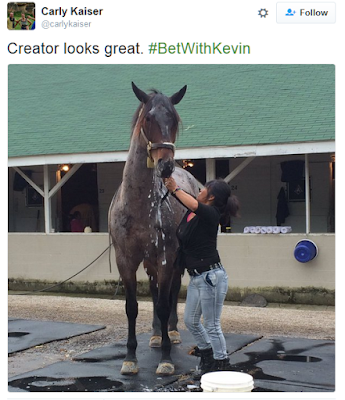 I think this classic, strapping looking young man is truly Japan's Lani. If so, this horse has created quite the stir. He apparently works different, bucks some, throws his head around, and people in America don't like that. As for his love of the bath, frankly, I give him some solid marks. There's really not much consternation here, and other than the obvious - there's no way she can wash the top of his head, so come Derby Day it may be dirty - it's not a big deal. Ikimasu Lani, Ikimasu! 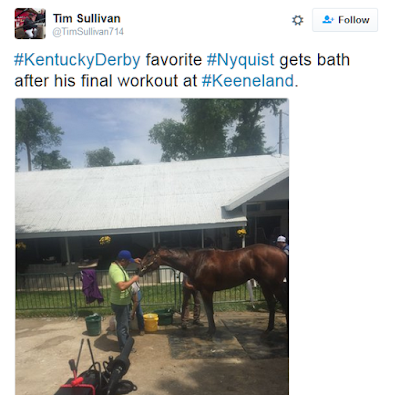 This shot worries me. The body language of the Breeders' Cup Juvenile champion is saying, to me, he'd like to be somewhere else, like sleeping under a tree, or hanging out in the paddock. Maybe he read everyone in the racing press say that he can win fast at 9 furlongs, but an extra 220 yards will cause him to stop like he was hit by a fat man in a wheel barrow. Maybe the influence of his second dam (who was cranky when bathed) is coming into play. Who knows, really, (we may never know) but the love of the bath is not there for me. 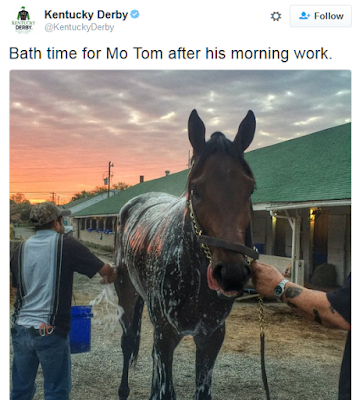 Well ain't this a cracker. Mo Tom = Mo Bath. Ears up, tongue out and suds falling off his back like he's a duck. After Mo Tom's career is over he could be a greeter at an aquarium. Can you say live longshot? 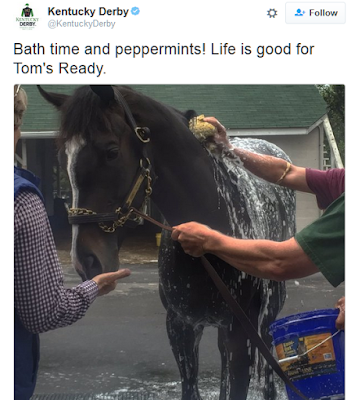 There are a lot of scary things about the Kentucky Derby -- big crowds, high takeout, Todd Pletcher's record -- but the biggest, scariest red flag for me, is when your horse needs to be bribed with peppermints to take a bath. I'll reevaluate this colt later in the week to see if he's progressed to taking a bath because he wants to take a bath, but right now we're concerned. 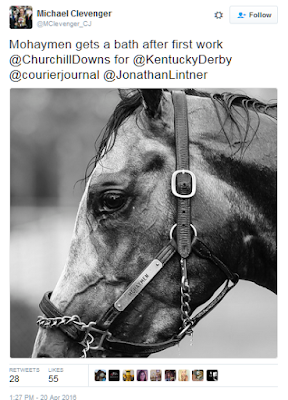 This picture throws me off a bit because it's in black and white and kind of artsy. But all I see is a lack of confidence. It's like the water is a scary foreign object, the soap kryptonite. Maybe he's deep in thought wondering why they named him with a Mo, when he is not a son of Uncle Mo, which confuses everyone. Maybe he's sad about his last performance. Perhaps he read Marcus Hersh tweets saying he doesn't like him and he's wondering "what did I ever do to Hersh?". I don't know, but it's worrisome. 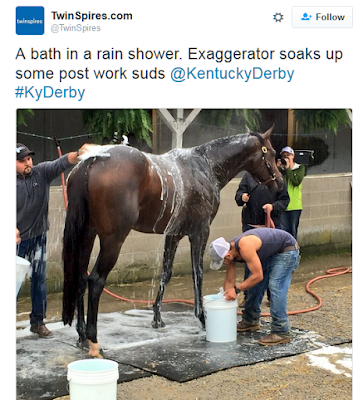 Ladies and gentlemen, here is your Derby favorite! We've got camera people taking pictures, a dude at Exaggerator's flank, and another guy with a bucket under his shoulder. Normally this would make a horse spook faster than a set of blinkers on Palace Malice. Not this horse. Not this Derby. Take a look at the way the suds roll off his shiny barrel. Take a look at the relaxed tail, the ears. Exaggerator looks like he was born to bathe. And for the Derby, born to bathe means born to run.

At the present time I am looking at an Exaggerator-Mo Tom perfecta, and I will use some closers for third. After seeing Creator this morning, I will add him, and make the above a three horse box.

I hope everyone enjoyed today's handicapping post. May the horse be with you.

at April 30, 2016
Email ThisBlogThis!Share to TwitterShare to FacebookShare to Pinterest

This analysis has it backwards. It's the pajamaboys that like taking baths. Real guys don't. Bet on the real guys stomping the pajamaboys.

Wife says that if Exaggerator had more length to run, he would have taken it.
He was definitely gaining at a rapid rate, but just couldn't pull it off. Hope it didn't have anything to do with his jockey's alcohol problem!