Frankly, Stronach Doesn't Give a Damn 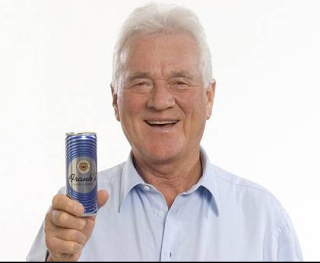 Frank Stronach has tried the Wizard, quadruple quadrefecta's (or double superfecta's, I can't remember), energy drinks, politics and I'm sure one hundred other things. He's been called some funky names - both good and bad - but he keeps right on plugging.

His latest iteration - let's call it Frank three point oh - involves a $12 million race at Gulfstream. The "Pegasus World Cup" is a race where 12 owners will place hold a spot in the gate by ponying up $1 million each. The winner will receive $7 million, and all entrants below the top three will receive $250,000.

Frank is spicing up the offer - he'd darn well need to, because most will lose the average price of a house in Toronto, Seattle, um, Boise - by offering owners a kicker:

"In addition to the prize money, participants would share in 100 percent of the net income from pari-mutuel handle, media rights and sponsorship.", notes Paulick.

With say $10M in handle, which about 10% (one million) is realized from the takeout, a TV deal that would be hard to fathom at this nascent stage and sponsorship dollars, it's difficult to see them realizing more than $2M, split 12 ways. Many owners will lose a sizeable amount of money, if so.

The above is back of the napkin, but the math seems to not work very well.

Meanwhile, Frank doesn't seem to give a damn, and maybe he shouldn't.

This is a sport where $200,000 was paid for Oscar Nominated to start in the Derby gates as a monster long shot.

This is a sport where millions are spent for a two year old horse who runs 220 yards with alacrity.

It's a sport where millions are doled out to a stud farm for a Mohaymen, and countless others, based on breeding on a piece of paper.

It's a sport where when $7M is won, most of it (after taxes) is sunk right back into the industry, benefiting the same breeders who will likely own a spot in the 12 horse field.

The math might not be there, but the concept is as old as horse racing itself is. It's "stakes racing" with a little edge.

I would not bet anyone $2 that this will not come off. When Frank has the bit between his teeth - with this overarching love of the sport that's in every fiber of his being - he usually gets something done.


at May 12, 2016
Email ThisBlogThis!Share to TwitterShare to FacebookShare to Pinterest

I've heard of some dumb horse racing ideas, but this one is arguably the dumbest of them all. The math never had a chance from the get-go. Under those circumstances, you leave this kinda stupidity, ALONE!!!!!