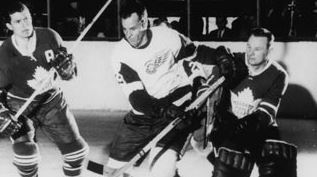 Gordie Howe, "Mr. Hockey" passed away today, at age 88. Throughout the world (and in Canada especially) the man was a true sports legend.

Number 9 played in a time that many people who watch the sport today are unfamiliar with. The game was nowhere near as fast, and players with skill, or moxy, or pure smarts could dominate the game, and make it incredibly entertaining.

Gordie Howe was not as gifted a scorer as many would think, but he played the game with such vigor, he was a game changer. Nicknamed "Mr. Elbows" for his prowess in the corners, he would intimidate opponents, come up with the puck, over and over again, setting up goal after goal. He was the quintessential power forward; a Gordie Howe hat trick - a goal, assist and a fight - carries his name.

For many, it's when hockey was hockey.

Horse racing (to many of us) brings back similar memories.

Remember in the 1980's (or before that for many of you) having to head to the track to see a star horse? For those outside a metropolis, we might have seen him or her on a grainy video on a sports show or newscast, but we certainly never saw them race. If such a horse visited your track, there would be an energy, and line-ups down the street to get in.

Even seeing a horse like Seattle Slew, or Cam Fella, or Affirmed, or Jate Lobell's past performances were a luxury.

These horses, like old time hockey players, raced and raced hard, too. Every week or two or three they'd be in the box, and we'd have to get a newspaper, or chat with a friend to see how they did.

It didn't matter if they lost - horses lost and bounced back fine. There were no trainers worried about a win percentage in stakes, or what a loss might do to stud value, they were more worried about making money.

It was a glorious time.

But, sometimes while thinking of yesterday makes us appreciate what was, we often time lose sight of what was.

Growing up in a hockey family, I got to hear stories. One of which, from a line mate of my father's in junior, kind of cut to the chase. This gentleman played several years for the Boston Bruins, and was traded to Detroit in the early 1960's. As the story goes (one day as a kid in the basement), upon negotiation of his Detroit contract, a condition was that he could not disclose his salary to anyone. Why, because he (and a few others) were getting paid more than Gordie Howe, and management didn't want him to know. That's "Old Time Hockey", too.

Today the players are getting paid what they're worth. They're not sent back out after getting hit in the head with lumber, they're taken care of with rules beyond the law of the jungle.

Today we can also watch the sport when we want, how we want. It's there for us in our busy lives. Finding out who won a game the next day seems, well, so 1960's.

Similarly, although I loved seeing a star at the track, with thousands of other fans who love horse racing, seeing him or her on my computer screen any time I want is a luxury I would never want to give up. Chatting with friends and fans of the sport on social media is a wonderful thing.

Horse racing - like hockey - has gotten safer, as well. Bringing a horse out behind the barn doesn't happen nearly as much. The world has changed and demands it.

Number 9 will always bring back good memories, just like old time horses do for me. But despite the difficulties in each sport today, I think we have it awfully good.

at June 10, 2016
Email ThisBlogThis!Share to TwitterShare to FacebookShare to Pinterest

Gordie Howe was paid less than deserved because Howe never thought it was right to ask for more money. If he hadn't married, he'd probably have always been underpaid compared to the other stars of his time. His wife had the business smarts. Growing up in Michigan, Gordie provided a lot of memories. One fight strategy stands out. Whenever a younger player decided to challenge the veteran to a fight, he would pull the opponent's jersey up to his his shoulders. The guy couldn't punch or see. Short fight.

My first in person experience with a great horse of the past was watching Bret Hanover. Unfortunately, I'm one of the minority who saw Cam Fella lose. Only lost a few. I watched him at Monticello.

Great piece. I can relate 100% to all of it. Rest in peace Gordie Howe...and thank you.

Great piece. I can relate 100% to all of it. Rest in peace Gordie Howe...and thank you.