Mark Cramer's book, Value Handicapping, was the first book I ever read about making odds lines. It provided me with a good gambling lesson, namely, anything is possible. If you have a horse in the race, that horse - somehow, someway - never has a zero chance to win.

For casual football fans that lesson was proven yesterday, when the New England Patriots came from an impossible spot (about a 1% chance in the 3rd quarter) to win the Super Bowl.

Yes they needed a lot of 'luck' that involved a lost fumble (it's about a coin flip on who recovers one), a catch that could not be caught three times if you threw it a thousand times, an actual coin flip in OT (not even giving the other team a chance at a score) and about ten other things. But, they had a "chance".

When something weird happens we tend to see a lot of this: 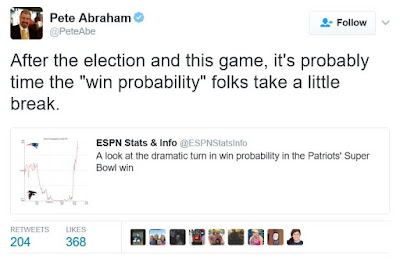 Somehow, a series of fortunate or unfortunate events (depending on your perspective) resulting in a surprising result, gets turned into "the math is wrong." No, it's not wrong. Don't slag the math just because you don't understand what it's saying.

For us as horseplayers, or gamblers, the math is all we need and it's the primary pass/fail decision maker. Yep, the Falcon's can lose, but if someone gives you 50-1 you don't want that side, at 150-1 you do. It's the same thing we do in horse racing, almost each day.

If you use the words "the horse can't lose" it's probably best to do it as hyperbole, because if you truly believe that, you probably just took a major bath on the Falcons. And it will take a lot of short-priced wins to get your money back.

at February 06, 2017
Email ThisBlogThis!Share to TwitterShare to FacebookShare to Pinterest