The Press is Treated in Polarizing Ways

The Masters begins tomorrow, but for those in the press pool it began earlier this week, because, for them, something changed. Augusta National invested millions in a state of the art, brand new press room and restaurant for the world wide reporters and commentators covering the event. 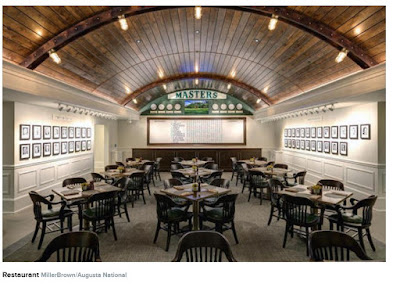 Golfer Rory Mcllroy:
The Masters is an older event, and they've always catered to the press. In fact, it is scheduled in early April because Augusta National wanted to accommodate the press; the press who were driving back to east coast cities from spring training. There's definitely been a relationship.

Meanwhile, in horse racing, we all remember Churchill Downs, back in 2013, moving the press area from the finish line.
It's tough to have a strong opinion that Churchill Downs was "wrong", because the world has changed. Reporting on an event that anyone can watch, via dozens of mediums, on phones, tablets, TV's; on youtube, or tweeted in gifs, is today's world. The print press is being decimated.

But, it is interesting to me. Augusta National's brand is about the history of the event, and always has been. It's who they are. They, through things like the new media center, embrace that and spend money on that tradition. They're not about wasting money, so they certainly feel the long-term health of the event is helped by this added cost.

Racing - another traditional game - doesn't seem to have that same vision.

at April 05, 2017
Email ThisBlogThis!Share to TwitterShare to FacebookShare to Pinterest