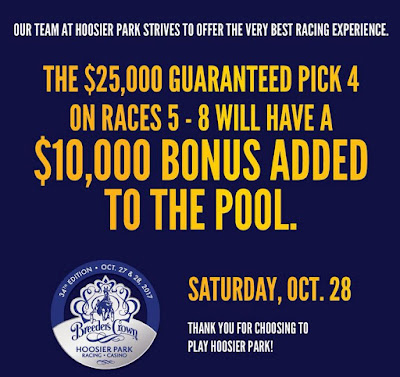 The Breeders Crown card kicks off at Hoosier, and this year there's a little bit of value for bettors.

Seeded pools are exactly like carryovers, however, major ADW's datafeed of carryovers do not normally include seeded bets. So, there's probably going to be more value in the pool, because the pool will probably smaller than a regular carryover.

The bet starts in race 5 and we'll share a few thoughts on each bet of the sequence here.

Race 5: This is a tough, contentious race. In normal sequences, we may want to dig deep and take a shot on a key horse, but with a seeded pool we should probably be more considerate to hitting the bet, and going a little deeper. 1,2,3,5,7,9 and 11 are all capable of winning the race, and probably each have fair odds in the single digits. The horse I am probably most interested in is the 5 at 8-1, Pacific Image. One would expect him to show speed this time. The nine is also interesting at a price.

Race 6: This is a little easier on paper, and if you're looking for a key, perhaps it's Filibuster Hanover from the trailing 10. If keying a trailer isn't for you, Fear the Dragon might be a bounce back candidate to use and Eddard Hanover is a nice horse. 1,3 and 6 are double digits and I think useable, if so inclined.

Race 7: Is the first Crown event of the evening and the chalk is world record holder Hannelore Hanover. She's a superstar and an obvious potential key. I'll be leaning on others, though. 3 and 5 are both sneaky here and I think one of them - probably the 5 - upsets the applecart. Mambo Lindy, Resolve and Crazy Wow are all possible in superspreads with keys in others races.

Race 8: Is the Crown for 2 year old colt trotters and the race goes through the 4 horse, who I think is a monster. He's not the best going colt out there, and maybe with some pressure he'll have issues, so I will use a couple more in other tickets - Met's Hall, Crystal Fashion and You Know You Do. If the 11 draws in somehow, I'd also throw him on a ticket or two.

As I see it there are three potential chalk leans in the last three legs, with a very contentious first race. I believe all three chalk are beatable, though. There's some meat on the bone.

There's a good deal of misconception with carryover pools. Often times I see people wanting to play them based solely on pool size to make a lifetime score (like in a Rainbow 6 mandatory). The fact is, the larger the pool, the worse the chance for a big score because there are so many people seeking for such a score (the A-A-All crowd), and they have more money than most of us do. This gives us a favorite longshot bias on meth.

In reality, the game is a grind. It's about getting paid at a rate and a level above expectation. It's this grind that's available in pools like tonight's pick 4 at Hoosier, that isn't available most everywhere else.

In a gambling game where our bankrolls are silently, yet potently getting kicked in the ass -  making it harder and harder to win long term (see Keeneland) - it's nice to see a pool where we have a chance to make a little scratch, and not feel like we need a shower after.

Here are the betting levels and takeouts for tonight's seeded bet.  Good luck grinding away everyone.

at October 28, 2017
Email ThisBlogThis!Share to TwitterShare to FacebookShare to Pinterest