The Night Everyone Watched a Baseball Game

Last night, game 5 of the World Series between Houston and LA was a marathon of long-ball proportions that must've made MLB purists physically ill. But boy, it was really exciting.

And on my timeline at least, it was the only game in town.

This, surprisingly, despite the SNF game between the Steelers and Lions being head to head with the Fall Classic. It's a ratings battle the NFL on Sunday night almost always wins and when the ratings come in it still might, but I sure couldn't tell.

Whatever happens, it's no secret that the NFL has gone through a year or so of ratings declines. There are dozens of reasons given for the decline, and who knows at this point which are right or wrong. But one thing everyone can agree on, is that the NFL has been listening.

For one major fan complaint - the game has no flow, and goes on too long with too many stops and starts due to commercial breaks - the NFL responded. If you're an avid NFL watcher this is noticeable. After kickoffs when we expect a break there isn't one this year. We see split screens during timeouts, with a commercial happily coexisting with the live feed of the timeout. It's completely different.

This is a sport who sees a viable and honest complaint that could hurt their brand forever and decides to address it. And it's not easy to address such a complaint - TV deals and commercial slots are long-sold, and are in contract. Cutting commercials costs everyone short term revenue. But there you go, it's done, with barely a month or two notice.

Flipping over to another sport, we have Keeneland.

As Bill Finley writes in today's TDN:
If they were the NFL who addresses long term revenue and branding issues - even if there's a short term revenue hit - that's exactly what they'd do.

Will they? Probably not. Because horse racing does not correct bad policy, it usually doubles down on it. Horse racing has rarely, if ever, looked at falling handle numbers and their effects on the long term health of the sport. This is one of the major reasons the pari-mutuel handle chart in horse racing looks like this. 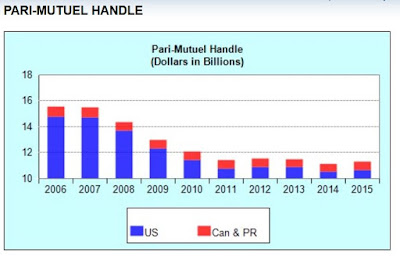 The NFL has its issues and that's apparent. But i) they know it and ii) they're doing something about it. I wish we could say the same thing about Keeneland, and racetracks like them.

Note: Ratings are in. Baseball wins the night at a rate no one could've predicted.

at October 30, 2017
Email ThisBlogThis!Share to TwitterShare to FacebookShare to Pinterest