I was scanning Paceadvantage.com this week and saw a few posts from players doing a little griping - some about Keeneland's juice hike, others about everyday things customers tend to gripe about. Let's face it, griping is a cottage industry in the sport, so it's not like it was anything new.

But looking back and scanning a few posts it reminded me of something.

Back in 2003 or 2004, the Southern Cal signals were big at Pace. Everyone loved watching the races from Santa Anita, and a lot of the handicapping done on the site was west coast focused. Over time, though, you'd see griping. And it had to do with field size. As I am sure many of you remember, Santa Anita - all Cal tracks really - was the King of the 5 horse field.

"I can't play this, I can't even find a bet in this six horse field"

"Why don't they have horses, I am about to quit"

You'd see these thoughts weekly from all sorts of customers. But when you looked at the handle, boom, it was still huge. So much for field size and griping, we'd think.

What five horse fields and 22% juice does, however, is degrade bankrolls over time; mainly because you can't find value with so few combinations, at such a high price. They're virtually impossible to beat.

The key phrase is over time. because on a Saturday afternoon everyone doesn't suddenly say, "I'm out" and leave. Nor do they take an ad out in the paper to tell you why they left, they just do.

Sometimes a raise in takeout does the trick to push them over the edge, sometimes it's finding another track to play instead, and sometimes it's the Lenny Moon thing, where he simply had enough.

I find it sadly funny in a way. California customers were telling you in 2003 they didn't want short fields. The response from California was i) continue to serve up short fields, ii) raise juice in 2006 iii) raise it again in 2010. 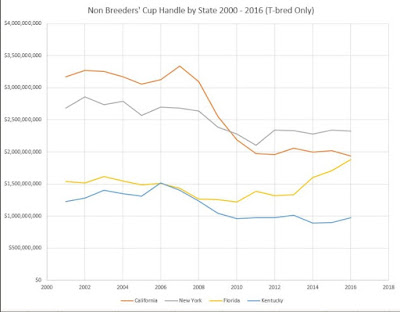 Equally interesting, is that in 2017 - virtually 15 years after these initial complaints about field size and bettable races - Tim Ritvo joins Santa Anita, and what does he talk about? You got it, field size and putting on better betting races.

Bay Meadows is gone, they paved Hollywood Park and put up a parking lot, executives have been fired, handle has been decimated. I'm not sure any of it could've been avoided - in fact I doubt it could've been - because the industry has a very, very slow response time. In this case, and I don't think it's hyperbole, it took a decade and a half.

What I hope California teaches us (and them, if I may be so bold) is that when customers are griping, you learn something. They are creatures of habit, so they stick around some, but as time marches on, they leave for the original reason they complained about. Customer burn rates are a slow flame, not a raging fire.

When we analyze Keeneland handles this meet I hope we can use the same strategy. Sure there's a boycott and handle is down bigly, but what happens today is not as important as tomorrow. Raising prices degrades bankrolls, and frankly, we have enough racetracks in North America struggling. We don't need to add another.

Listen to customers; they're telling you something. They're waiting for you to help them become better customers.

at October 21, 2017
Email ThisBlogThis!Share to TwitterShare to FacebookShare to Pinterest

Please tell me about any successful business that deals with the public that ignores their customers. You can't. The problem is that unlike the real world, the racetrack executives that ignore their best customers amazingly still have jobs

Please tell me a business where you can not only ignore but insult customers, some of them your bigger clients. The amazing part of this scenario is that the racing executives that do this still have jobs.