Two Derby preps were run this weekend, the biggest one of the bunch in terms of interest, at Santa Anita, with buzz horse Justify proving his mettle in California, beating the very talented Bolt d'Oro quite handily.

I was most interested to note that when Bolt was asked, he couldn't even get to the Justify tail. I really think he didn't want much to do with that horse.

It was an interesting race to analyze, and twitterites seemed to be going through the usual machinations that surround each and every Derby prep.

Was the final number good? It appears to be.

Was Bolt d'Oro bouncing some off his last taxing effort, where the trainer noted he was dead tired, and he didn't show his best fastball? Maybe.

Was the margin back to third and fourth enough to say those two, who are considered Derby major Derby contenders, ran a formful race? Probably, although maybe you could reasonably think they should have opened a bit more daylight.

I think it's reasonable to conclude that both look like serious racehorses; with the winner, no matter how you slice it and dice it, emphatically answering a lot of questions.

Dougie Sal, emerging from a snowbound Erie PA hibernation, had his internet turned on as of a few weeks ago and provides some solid analysis of the major races on the YouTube, including the SA Derby and Blue Grass. I'll watch that later today to see if my analysis is wet, or all wet according to Doug.

Trying to win? A common complaint in all types of racing here in North America. At Woodbine, a driver buried a short shot recently, to much consternation, and the judges stepped up to give him a fine and days. You can see the race here.

After a chat on twitter there was a drop mic moment, in my view, about how and when it could be determined if a driver tried with a very low odds horse.

Do you think if I told Roy before that race I'd give him 10k cash if he won the race that he would've driven the horse the same way?
— Jimmy V (@trackingwinners) April 9, 2018

Of course the driver would've pulled the right line, and that's the problem. With the ten K prize from Jimmy V, he makes the ten K for himself, so off he goes in search of a win. Well, he's driving for $200K of the bettor's money in that race  - he needs to treat that money like it's his own.

Keeneland racing returned with lower takeout rates from last fall, when they were off pretty miserably, but still higher takeout than last spring. Their first weekend, according to @o_crunk, was a little ho hum, at up 1% per entry. The weather probably played a part. 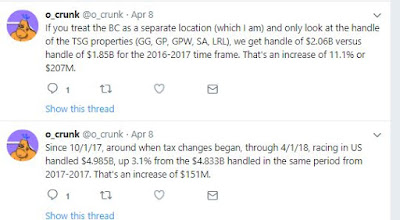 One wonders, what's the recent handle total increase made of, tax changes versus handle from only Frank tracks?

Without a deep dive and a lot of data we won't know. I am still of the belief that this TDN piece looking at bettor bankrolls explains the tax changes, but since about September of last year (before the tax changes) handle was starting to move, primarily at Frank tracks. Mental gymnastics aren't just for Derby preps.

This month's issue - speaking of Frank tracks - of the Horseplayer Monthly is out and it's free. It has a look at bet downs at Gulfstream, and if they've gotten worse over the last few seasons.

Cheers and have a really nice Monday everyone.


at April 09, 2018
Email ThisBlogThis!Share to TwitterShare to FacebookShare to Pinterest