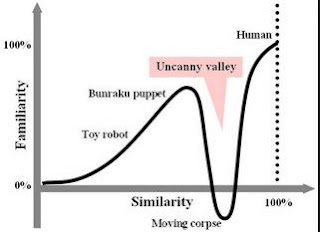 The "Uncanny Valley" was a concept first coined in the early 1970's by a Japanese robot maker.

He noticed that when robots are clearly robots, they're embraced by the public, as cute or neat, or interesting. As the robot becomes closer and closer to lifelike, however, it reaches a point where it becomes repulsive.

This reaction was noticed (and talked about in Newton's Football) when the producers of Shrek focused group different types of animation to children. While the kids laughed happily while shown type after type of animation, one iteration caused them to instantly change the smiles to literal screams. That iteration was so lifelike it was considered so creepy it scared them. The producers immediately scrapped that version, went to the older one, never wavered by pushing the envelope too far, and made a pile of money.

This uncanny valley - the point where we become too uncomfortable with something - is seen in other mediums as well.

Back in 1905, Teddy Roosevelt, a lover of football, realized that sport was on the precipice. People enjoyed the game and it was growing, but it was way too dangerous. 18 players had died the previous year, and the uncanny valley for fans was palpable. The excitement for Shrek was fine when people knew it was a game, but when the real Shrek showed up, people were horrified.

Roosevelt called together all the football powers, and rules changes - like not allowing mass blocking with certain formations, a line of scrimmage and downs - were made. Many of these changes are in use today.

Horse racing has its own uncanny valleys, and you and I live with them each day - horses perishing on the racetrack. Your uncanny valley might be the Grand National, or a cheaper racetrack with higher than average breakdown rates. For casual fans, they dance around the uncanny valley often, exemplified when we hear "I love the sport, but that part of the sport makes me question myself."

Ten years or so ago it looked like the sport was smack dab in the uncanny valley; polytrack and other surfaces were being tested, safety measures were in their formative stages. But I am not sure it was.

I don't want to belittle the safety measures because they have done a world of good, but when a place like Keeneland reverses on poly so quickly for business decisions, it makes me wonder. I simply don't think the sport was as close to the uncanny valley as we thought they might be.

Perhaps that should be expected. 113 years ago when Roosevelt spearheaded changes, it was in response to people dying, and those people were sons of the upper class in football playing colleges like Harvard and Yale.

In 2018, although the public's attitude shift towards animals has changed measurably, it's not quite about that. They're still animals, and revenue keeps chugging. Maybe they aren't wrong.

I suspect racing's uncanny valley moment will come, however. There will be a day - maybe a generation hence - where if a track reverses course on a horse safety measure there will be dire consequences; where a politician forces change; where a city bans a racetrack, like many have banned a circus. But that day is not today.


at April 25, 2018
Email ThisBlogThis!Share to TwitterShare to FacebookShare to Pinterest