The Wednesday Spin 'round Racing 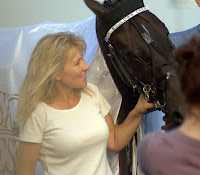 Some news and some notes.

First, the banning of some steroids in horses debate is heating up. Illinois has joined the fray. I am not a trainer so I don't know the science involved, and as an owner I am very concerned about medications as a rule, but this one just does not seem to grab me.

However, I did read this piece by Randy Moss on his blog. It did start to sway me. Especially the following quote from Bobby Frankel.

Hall of Fame trainer Bobby Frankel sat on a bench outside his Saratoga barn this summer and sounded a refreshing note. Frankel said he had never used steroids on his racehorses. He said his primary owner, Juddmonte Farm’s Prince Khalid Abdullah, forbids steroids to be used on horses he owns. And Frankel added that he didn’t use steroids on his other runners, either.

“Most trainers use them, and they’ll admit it,” Frankel said. “Maybe I’d win more races if I did, but I’ve done all right without them. I don’t think steroids are good for horses, I don’t think they’re good for racing, and I’m a big believer in getting rid of them completely.”

Maybe it is a good idea. I'd love to know what people think about it.

Second up, Hong Kong thoroughbred racing feels a squeeze. It's what we have felt in North America for a long time now. Casino's - big ones - in Macau have been siphoning off gambling cash from Hong Kong racing. Thanks to equidaily.com for placing up this news story on his site.

This will be very interesting to see how they combat this. Right now I think they are on the right track. Hong Kong has been run well, and is very reactionary to revenue leaks as we have detailed below in a few posts like this one on racing integrity.

Last year, the club managed to reverse a slide in gaming revenues after the government allowed it to offer 10 percent rebates to gamblers losing on bets of HK$10,000 (US$1,280; €869.15) or more, just as the illegal bookmakers were doing.

"We have hit the illegal market in a really hard way," Engelbrecht-Bresges said

Nice! When faced with price pressure, they responded by lowering prices - no hand-wringing. Well done!

Still, worries Engelbrecht-Bresges, "the issue with horse racing is ... if you lose contact for three months, the probability you will stop betting on horses is significantly higher because you have lost track of the horses. This kind of behavior change can have a major impact on our customers."

This is known to all gamblers. It is good to see a track head cognizant of this. It shows he is responsive to his customers. Every time I read a Hong Kong story they seem to be on the same page as the customer. Very refreshing and perhaps it is why I am confident they will be able to compete with Macau casino's.

We'll see how this plays out.

Batting third, some standardbred news caught my eye. Bjorn Goop took the driving title in Sweden. Is this big news? No, not really. But I love saying the name Bjorn Goop.

Fourth, some cool B track news in Ontario. Well I thought it was kind of cool. People are trying to grow the sport by working and thinking. If you are a daily reader of the blog you'll know that we like that, whether what they are trying works or not. Grand River Raceway is sponsoring a handicapping contest with $11,000 to be given away. As usual, great job to Kelly et al at the friendly Elora track.

In addition, Kawartha Downs is running a year long Preferred series for pacers to hopefully attract better horses. Well done to them too. People trying. Thumbs up!

Below a commenter asked about "What should Woodbine Racing look like" in terms of classes, purses, takeout structure and more. I have been thinking about that and frankly it is a tough one. It is easy to be critical when you are not in the trenches. Let's face it, we can complain about everything at times in racing. A good deal of the problems at Woodbine are attributed to circumstance, namely industry takeout rates, competing racetracks, horseman issues, CPMA issues and more. Regardless, we will take a stab at that question in the near future. It should be fun.

Last but not least. Burning Point, the tough-as-nails Camluck mare has been retired. What a nice mare she was. I remember way back when in a 3YO filly conditioned race watching BP go up against Armbro Amoretto. What was this upstart doing challenging Amoretto at the head of the lane? Going by her, that is what she was doing. We need more like her. Racing fans are sad to see these types go. They are the true essence of a standardbred: Hard-working, willing to please and tough like a two buck steak.

Of special note, Ontario horseman Fred Drouillard developed her. I have noticed time and time again that Fred's young horses do very well. He is a fine developer of horseflesh, in my opinion, and they tend to last a long, long time. He must let them work through aches and pains early in life without stress, which pays off later it seems. Fred also developed hard-knocking mare Illusionist. Still going strong and on her way to being a million dollar winner.

I think if more people like Fred trained down our young ones, we would not have a horse population problem and our equine stars would be around for a heck of a lot longer than they are.

Finally, my picture in the piece is explained. I notice Cyril Hayes passed away. For those of us who spent many years watching Greenwood racing, and then on to Woodbine this is sad news. Are you like me that when you see an owner you can usually tell a bit about how he lived his life by looking at how his horses were treated on the track? If so, Cyril was a good man. A long time client of horseman Garth Gordon and seemingly someone who loved the game. He was in it for a long, long time. He bred Boulder Creek and many others. Boulder, after last years Classic series win at Mohawk is pictured above.
at January 09, 2008
Email ThisBlogThis!Share to TwitterShare to FacebookShare to Pinterest