Quick Notes on a Monday 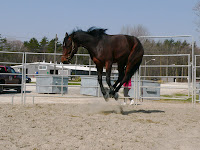 I hope everyone had a good weekend. The weather (in the east) is absolutely beautiful. This time of year is always one that I like. As a racing fan, the stakes are right around the corner, and soon, summer schoolers for 2yo's.

In this vein I got to reading Woodbine's shiny domed on-air 'capper Mike Hamilton's blog. It is a blog dedicated to an ownership group (two actually), that he mentors. Their first purchase, Justa Minx broke her maiden nicely last week. Mike has some great pictures up, and stories about the win.

This is harness racing. A whole bunch of people can get involved at a low cost, and go watch their horse go. I bet not one of the folks involved is worried about making money. I and many others are the same way. If you can break about even, the value you get from watching your horse go is worth its weight in gold. The stories Mike has up on the blog are testament to that. I love the bit about how a bunch of owners brought her carrots after the first win. This is what the sport is about and I wish them all the success in the world. If you want to see some awesome photographs like the one above (that's from Mike on his blog), pop over to his site.

He has notes up on their 2YO as well, and how he is doing. I feel at a loss this year. We usually have a piece of a few yearlings, but this year we could not make it happen. It was a tough year for the stable. 12 months ago I was getting reports on five - two fillies and three colts. That is always fun, and you can tell in Mike's typing voice he is excited about their Modern Art colt. I would be too!

It is a great time of the year.

Calgary Flames player has won the Swedish V75. We have mentioned it often. Helping players win and promoting them is important; letting people repeat the mantra "you are a sucker to play horse racing" is unacceptable without a response. Why WEG et al do not issue a press release a week about winners is beyond me.

Some new pics up at the Harness Edge of Somebeachsomewhere. What a beauty!

Wagering Conference and Comments to "Give the Tax Back"

Fantastic comment on "Give the Tax Back" by a poster from Los Angeles. This is so important because we often hear racing speak of offshore sites taking revenue that they would have had. Anyone that plays with rebates and ups their volume knows this is not the case. This is never more apparent than in this comment:

I was using pinnacle offshore until the debacle. Because of the rebate I found a way to make place bets profitable. I wound up with a 3.2% loss, but a rebate of 7%. It actually was a rebate of 6.2% as they did not give a rebate on 2.20 horses.

Now the kicker is, I went from betting about 30 to 50k to 1.3 million that year.It made the churn factor possible. If takeout is lowered it may have the same affect. I now have changed my play where place betting is profitable, but it is so small that I have stopped. I would definitely go back if takeout is lowered significantly.

Everyone I know that has played with lower prices has experienced the same thing. In a news story we often hear a racing insider say "look, he bet $1.3M at an offshore. If you shut it down they will play 1.3M with us". No, in some cases it is $30,000. In most I would say it is zero. Once you win, and can win, and have a high betting threshold, you don't go back to playing $12 a race. It is difficult. Which is even more worrisome to me, as someone who cares about the sport. This man is now sensitized to bet $1.3M a year. Why don't we put in place the environment to let him? Don't we want people playing one point three million a year instead of thirty thousand?

If you would like to comment, please do. We are trying to get as many as we can. Sometimes it is finnicky to leave a comment, so email under "my profile" if you'd like.
at April 21, 2008
Email ThisBlogThis!Share to TwitterShare to FacebookShare to Pinterest

Hey PTP,
Is there going to be archivied video of the conference? I would love to see it. It is massively important.

We had a nice meeting today about "new bet ideas" on the phone. There was some good chatter and there are some good (present company excluded) panelists, including a gentleman from New Zealand who should be able to have an interesting opinion.

I am pretty sure, like in the harness tracks of america they will have a transcript. There are some good sessions so I hope so.

We would love to see the
transcript if no videos.

Best of luck to you.